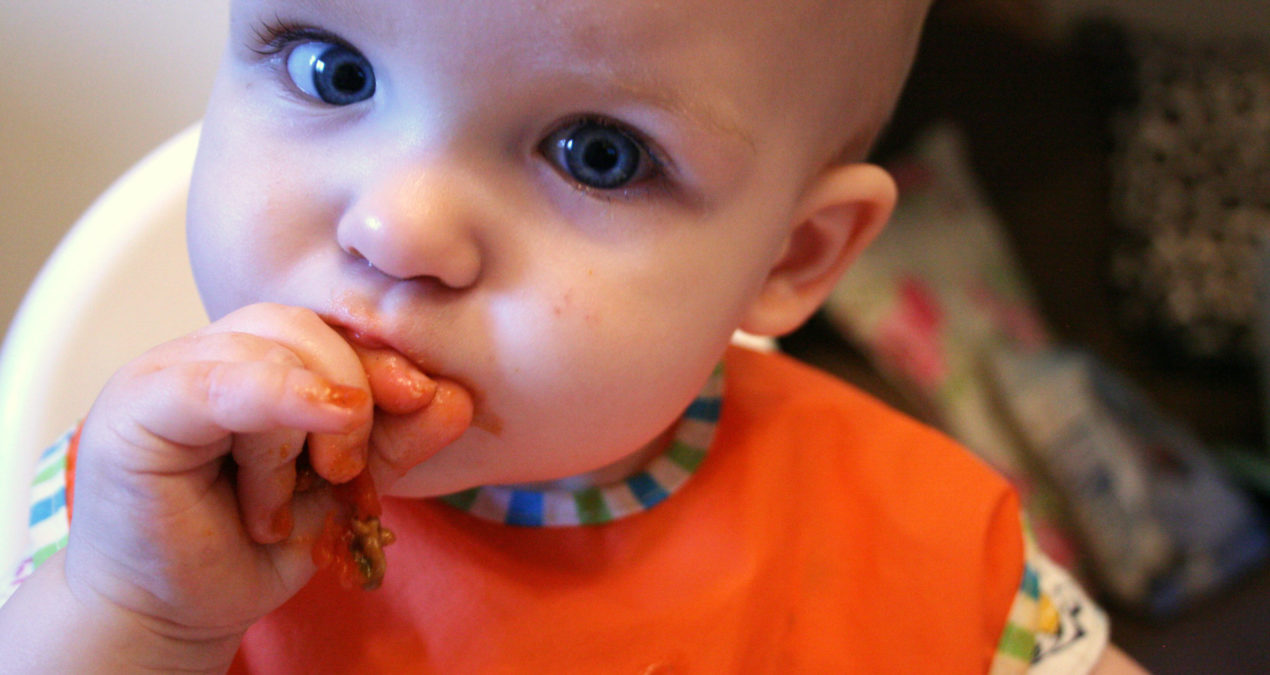 I absolutely love pasta. I’d eat it every night of the week if LPD would agree to it. And my easiest go-to meal is a good old-fashioned Spaghetti Bolognese. It’s the one meal I can always guarantee I have the ingredients for. I chuck in whatever vegetables we have in to bulk it out and add in extra nutrients, and with a sprinkling of cheese as a little treat, it’s just moreish, isn’t it? Who DOESN’T love spag bol? So when Dolmio offered me some ingredients especially to make my favourite dinner with, I didn’t need asking twice. I did the electronic equivalent of biting their hands off at the chance.

Isn’t it wonderful when blogging literally puts food on the table?

Last Monday, I made use of the beef mince to make my trusty favourite, padding it out with plenty of veggies: onion, green pepper, mushrooms, courgettes and carrots and within half an hour, I had a saucepan full of bolognese that fed Pickle, LPD and I with plenty leftover to freeze for another day: a pot to freeze for LPD and I and lots of mini portions for Pickle frozen in his Oxo food tray. 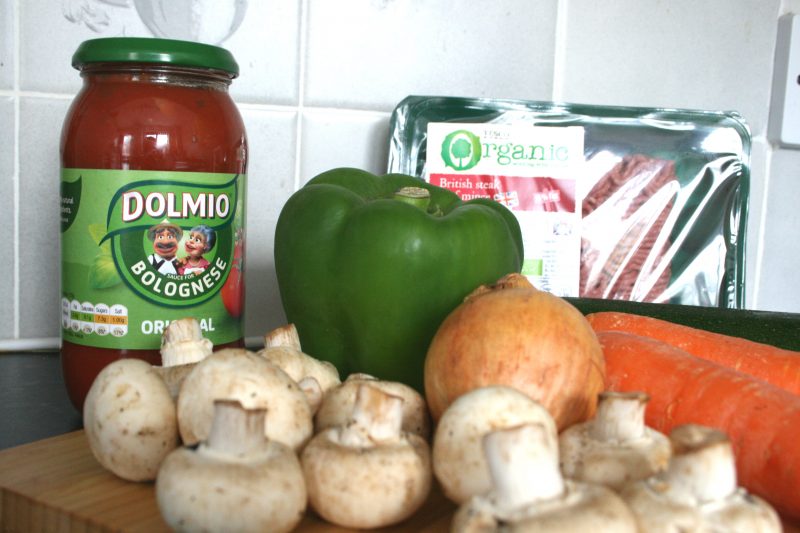 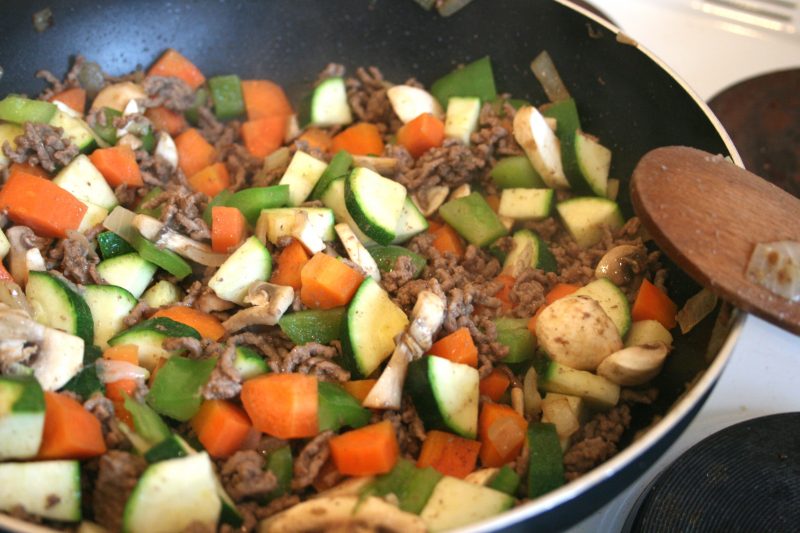 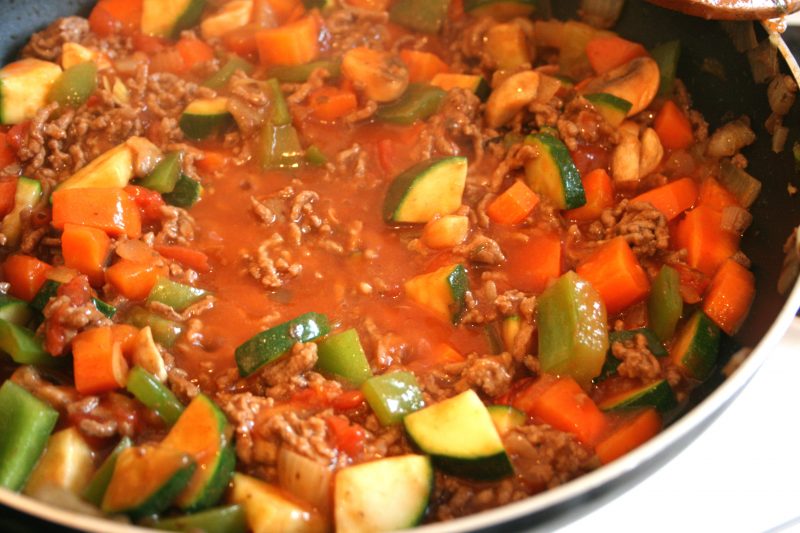 We’re quite relaxed with the food that we give to Pickle, and he usually has some kind of variant of whatever meal we’re having but I’m wary of giving him too many ‘ready-made’ items as I always worry about what’s in them. But Dolmio sauce is packed full of flavour with no artificial colours, flavours, preservatives or sweeteners, which means I’m happy to feed it to him, worry-free.

In each jar, you’ll find at least 10 juicy diced tomatoes, a dollop of tomato puree, half an onion, a tablespoon of sunflower oil, a couple of cloves of garlic, a handful of herbs including basil, a teaspoon of cornflour, a teaspoon of salt, a pinch of pepper, two teaspoons of added beet sugar for taste, a squeeze of lemon juice, a splash of water and nothing more.

Pickle is getting really good at eating bolognese now! He can easily pick up the pasta and amazingly can somehow scoop up the mince too (although we have also started to spoon feed him some of the mince so we can make sure he’s getting as much in as possible). To make it easier for him to eat, I thought I’d try and make some easy-to-hold stuffed/topped vegetables. 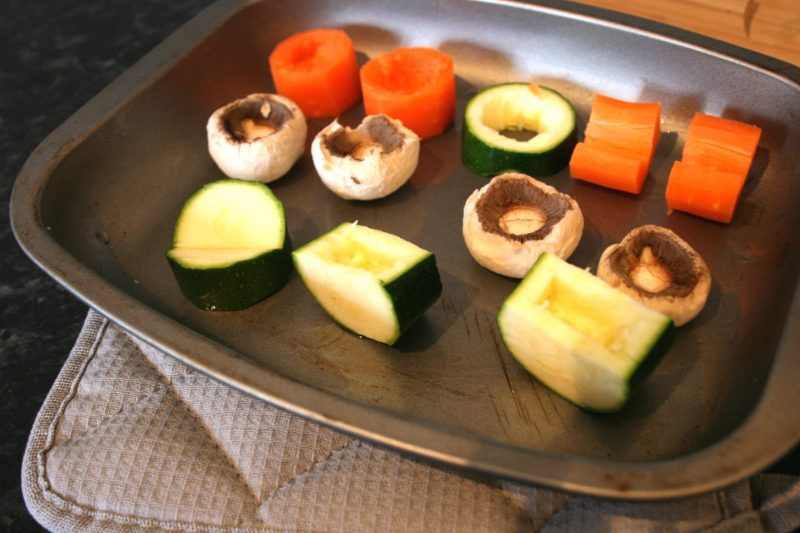 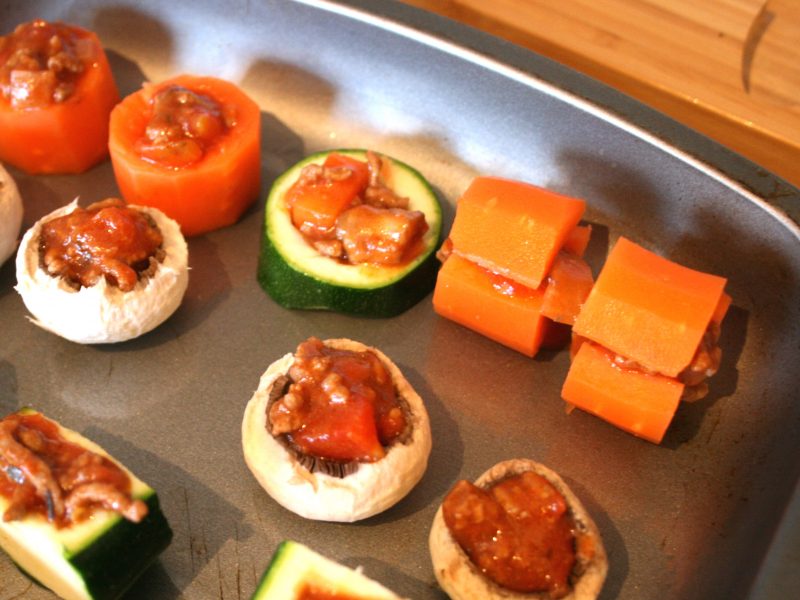 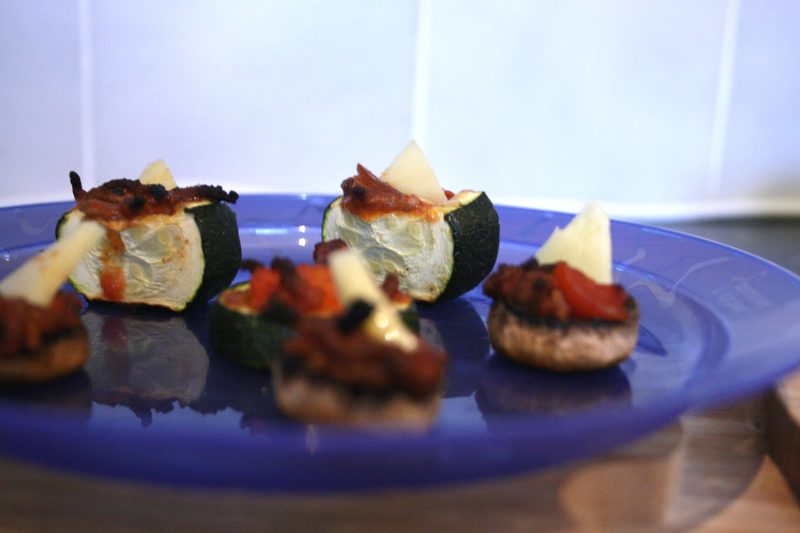 I had the idea of trying to make them look like boats, so tried to add a shard of cheese to look like a sail but not sure it really turned out that well! Someone a bit better at food styling might do a better job – so if you attempt it, definitely send me some photos. I’d love to see.

Regardless of how they looked, it was all definitely enjoyed and Pickle seemed pretty pleased with his dinner. 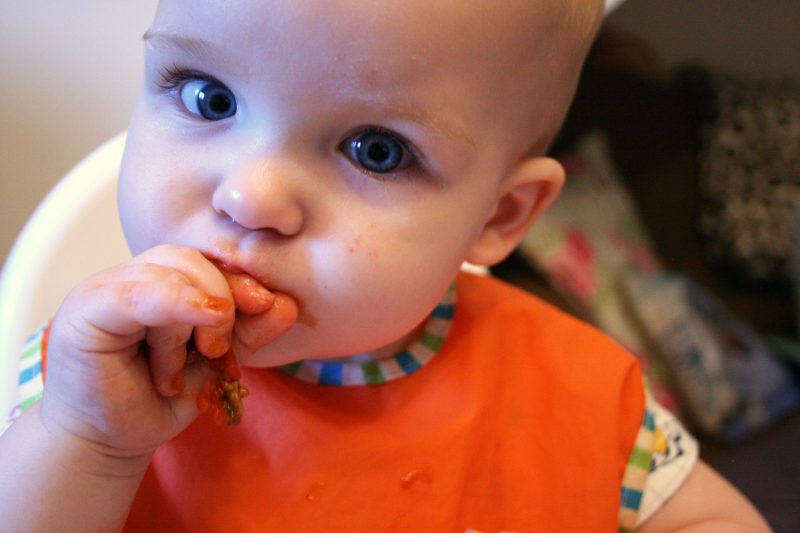 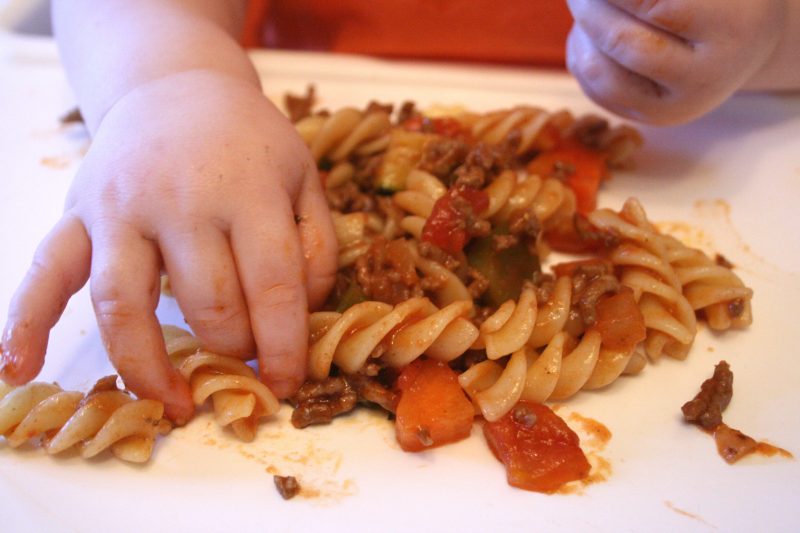 There were some lovely fresh chicken breast fillets in our food delivery and I’ve never thought of pairing chicken with a bolognese sauce before so decided to concoct something with that. With the end of the week nearing and the cupboards starting to look a bit emptier, I didn’t have a great deal to team it with and so decided to try making my own Italian version of the Tex-Mex favourite quesadillas.

I cooked off some onion, some diced chicken, peppers, courgettes, mushrooms and sweetcorn before pouring in the bolognese sauce. To try and thicken it up a bit, I added a handful of grated cheese. And then another handful of cheese. Whoops, naughty (don’t worry: this was a meal just for us parents. Pretty sure the amount of extra cheese I used would have given Pickle kidney stones). 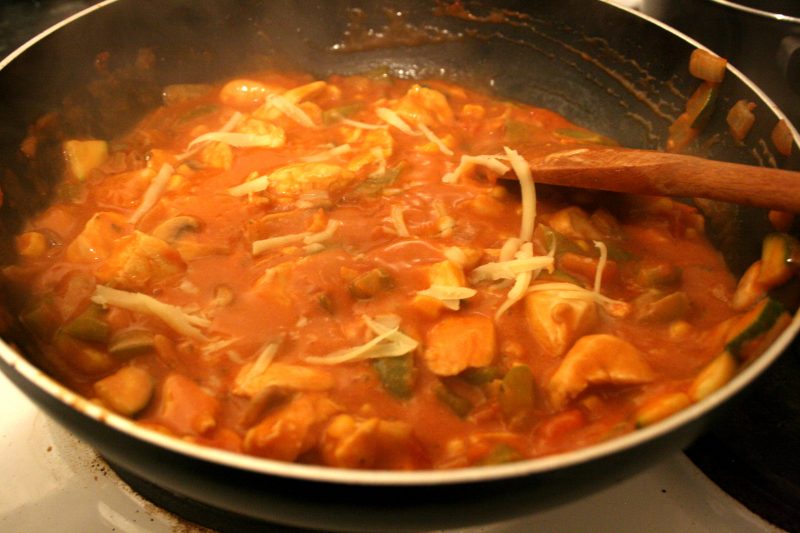 I then placed a wrap into our frying pan, spooned the chicken mixture on and placed another wrap on top. I let it warm for a few minutes before using a handy plate to help flip the whole thing over to warm the other side too. I was a bit nervous as to how they’d turn out as I’ve never attempted a quesadilla before, let alone creating my own version, but I needn’t have worried – it was super scrumptious! Although, I definitely think we could have done with sharing. I underestimated how filling they would be and I was absolutely STUFFED by the end of the meal. The good news was that there was also loads of the chicken mixture left so it’s super economical. 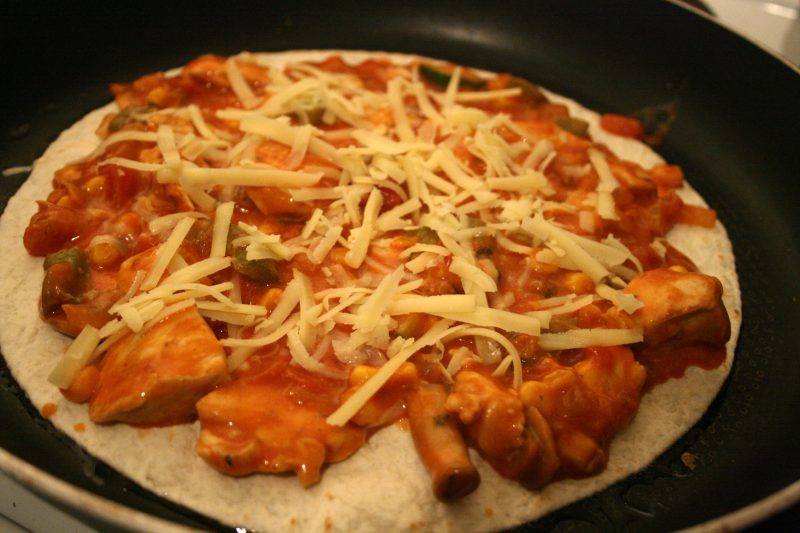 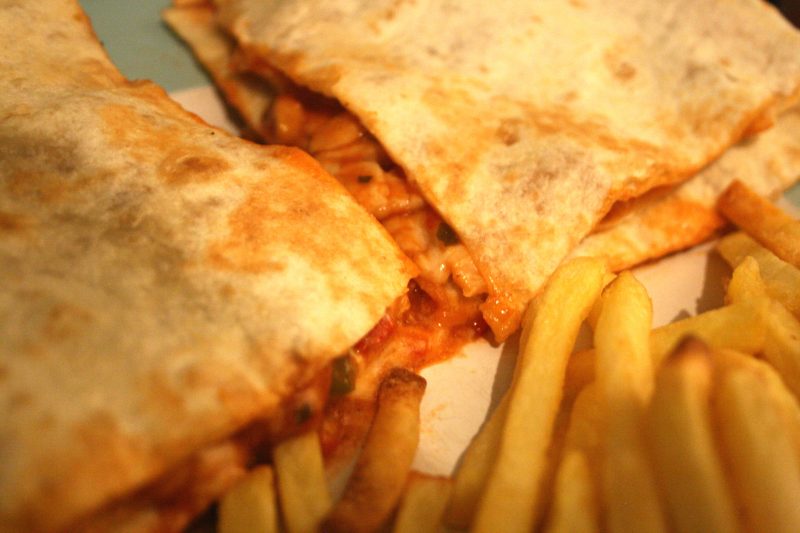 All in all, two great family dinners that we were able to stretch out to last at least two further meals making them not only time-friendly but budget-friendly too! #ThankGoodness for Dolmio. I’d love to hear what your midweek meal favourites are – drop me a comment below and help share some food inspiration.

Disclaimer: This post is an entry for the #Dolmio #ThankGoodness Challenge, sponsored by Dolmio. www.dolmio.co.uk/thankgoodness. We were sent a food delivery from Dolmio in collaboration with BritMums in order to make and share these meals with you. 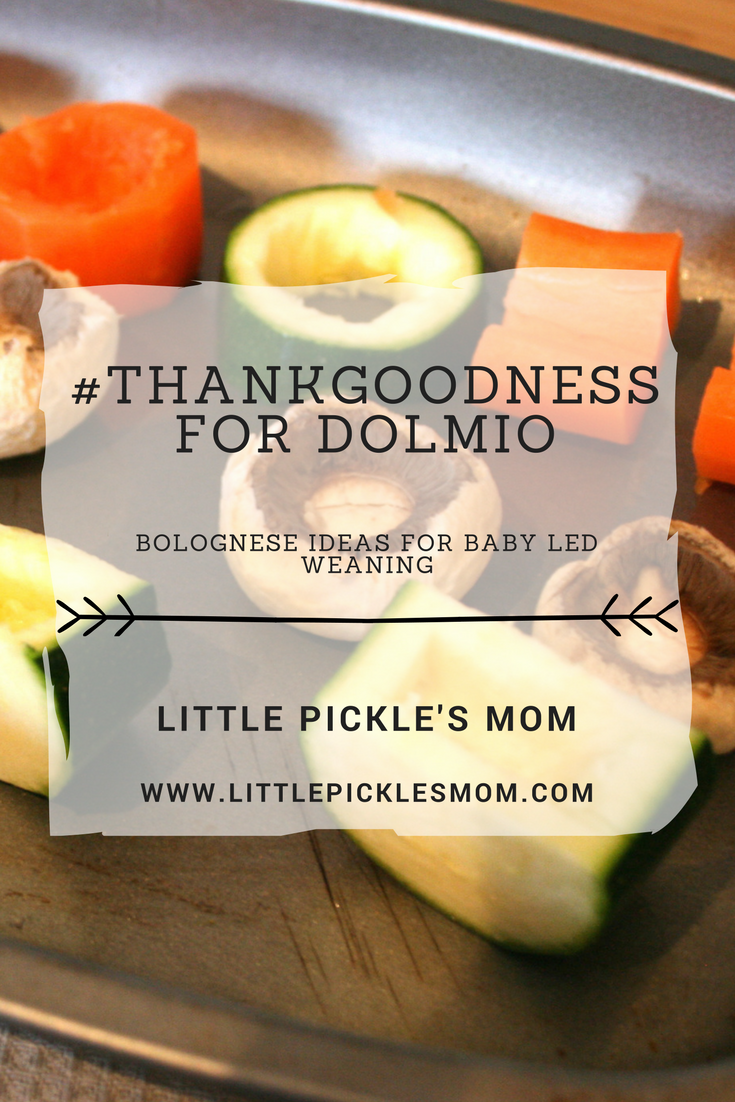