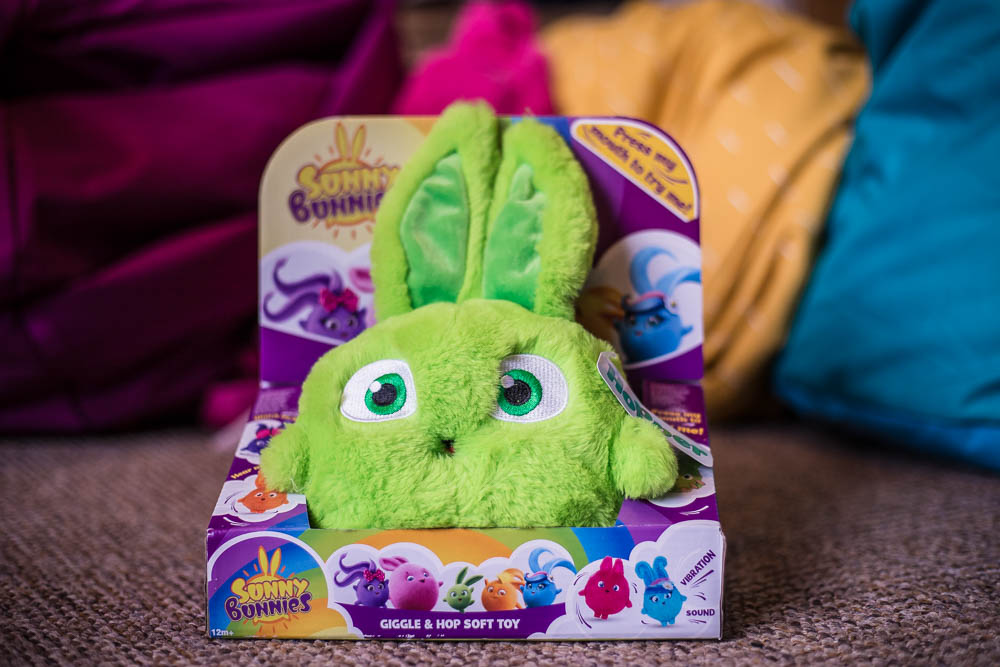 AD – this toy was provided to use for the purposes of writing this review. This post contains affiliate links, identified with an *.

Sunny Bunnies has been a bit of a lockdown favourite in our house. And in truth, the music has become the soundtrack of our working from home and home-schooling experience. I reckon if I hear its upbeat, cheery music again in thirty years’ time, I’ll be instantly transported back to 2020. I may not want to be transported back to 2020 (I’m not sure there are many people out there who would want that either) but at least it’s a reminder of something sweet and fun during these difficult times!

Let me introduce you to the bunnies. From left to right, we have Iris (purple with a pink bow), Turbo (orange), Big Boo (pink), Hopper (green) and Shiny (blue). They are curious, mischievous and lots of fun. Pickle really loves the episode where the bunnies end up getting ‘stuck’ in the TV and have to try and find a way to get out – he often asks if we can do the same and jump into the TV like them! We started to watch Sunny Bunnies on YouTube, but they are also available to watch on Netflix and Amazon Prime.

We received a Hopper Giggle and Hop Toy from Posh Paws to test out, and he’s a very welcome addition to our home. He arrives in a little cardboard box but don’t fear, it’s really easy to get him out of the box and comes with batteries so he’s ready to go. You may want to switch out these batteries to ensure a fresh set that will last longer, but you’ve got some lead time if you don’t have batteries close to hand and have a child eager to play!

The Giggle and Hop Sunny Bunnies Toys pretty much do what they say on the tin (for want of a better turn of phrase). Although the bunnies in the TV show are different sizes, they are all approximately 29cm tall. When a small button is pressed behind his mouth, Hopper giggles and bounces around for a short amount of time. And that is the extent of this toy’s functionality really. We’ve been playing with it as a ‘hot potato’ type game, where we pass it between ourselves when it’s giggling and wriggling and see who ends up holding it at the end of it’s giggle time. Pickle also really likes putting it on the floor and following it around – it’s quite impressive how far it moves itself across the carpet!

We’ve also used the toy as the prompt for some learning about rainbows, similar to our colour work with the Colour Mixing with Galt Toys Rainbow Lab Kit. Pickle thought Hopper might like to be surrounded by all the colours of the rainbow and so used some brightly coloured pens and pencils to draw him a picture to sit on.

If your child is a fan of the TV show, it will mean a lot to them to have their own Sunny Bunny at home but the toy itself probably doesn’t hold up as entertaining enough for children that aren’t already Sunny Bunny fans (although, the same can probably be said for most licensed toys). This large Hopper toy can be bought from Argos, Amazon* and selected Tesco stores and the other Sunny Bunny toys in the range can be found at those retailers too. The large toys have a RRP of £16.99 and are suitable for children ages 12 months+ and the range also includes medium sized toys and small ‘slam’ versions that giggle on impact.