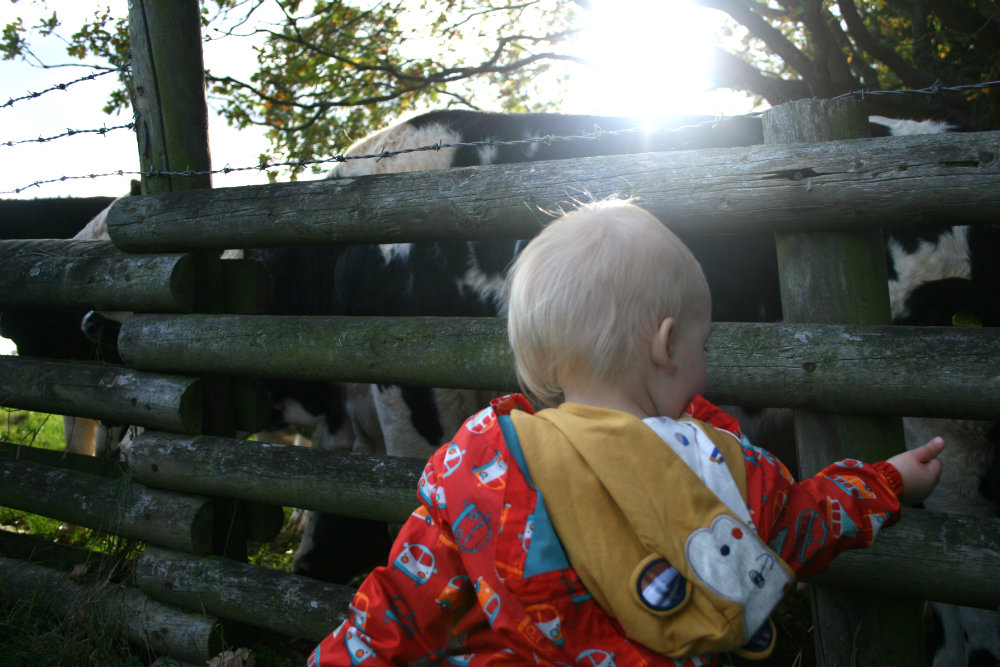 We all know that babies, toddlers and even children do certain things at their own pace, in their own time. I’ve tried not to worry too much about hitting certain milestones by a particular age, and I’ve never had reason to be concerned, but I have noticed that Pickle isn’t as vocal as some of his friends. He’s quite good at telling us what he wants by pointing and making noise enough to be quite clear, and he does say some recognisable words (cheers, please, this and go being the four most commonly used!) but that’s more or less the extent of it. So, in an effort to encourage him to try saying more sounds and words, I’ve been trying my best to hammer animal noises into him. 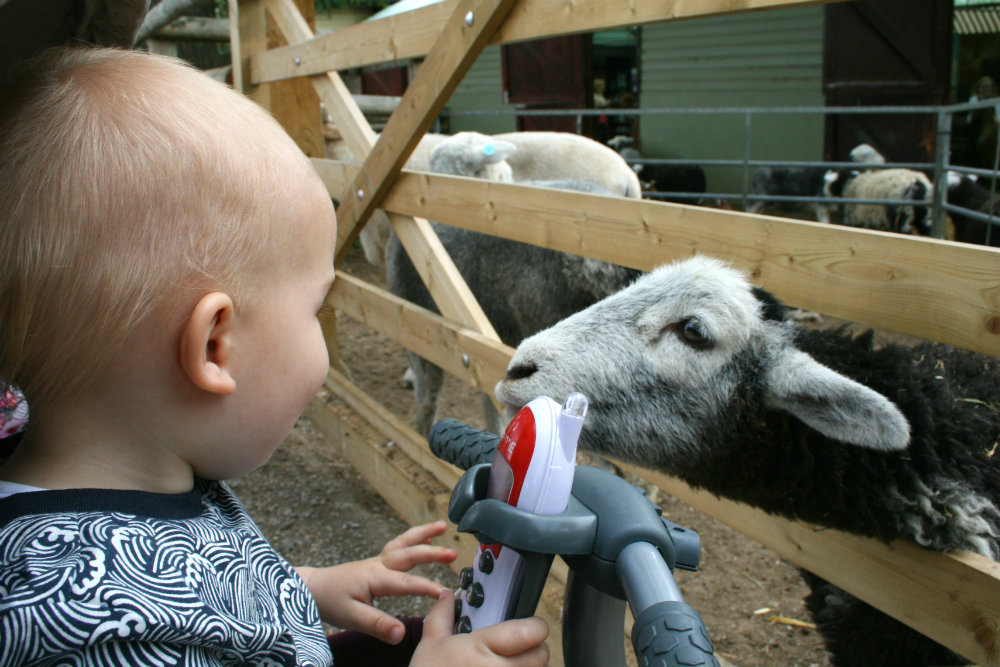 I’m not sure why I chose animal noises, especially after reading this American article which basically slates it as a pointless exercise but in my mind, if he can learn how to make animal sounds, that surely paves the way to further language skills? He’s not only listening and comprehending but learning how to manipulate his voice and tone, using his tongue and forming different mouth shapes. Besides, it’s heart warming to hear and will come in useful for future farmyard visits! So here’s how I’m trying my very best to get him ooh-ooh-ah-ahing, oinking and baaing.

The easiest way by far to get him engaging with animal noises is with books. He’s just at that lovely age where he loves nothing more than sitting on a lap, with a book, turning the pages. Thankfully, animals seem to be a real trend in the books we have for him so we have lots for him to choose from that we can turn into fun animal noise making sessions. Even if the book isn’t expressively about noises, there’s sure to be an animal or two on each page that you can point to and chat about. 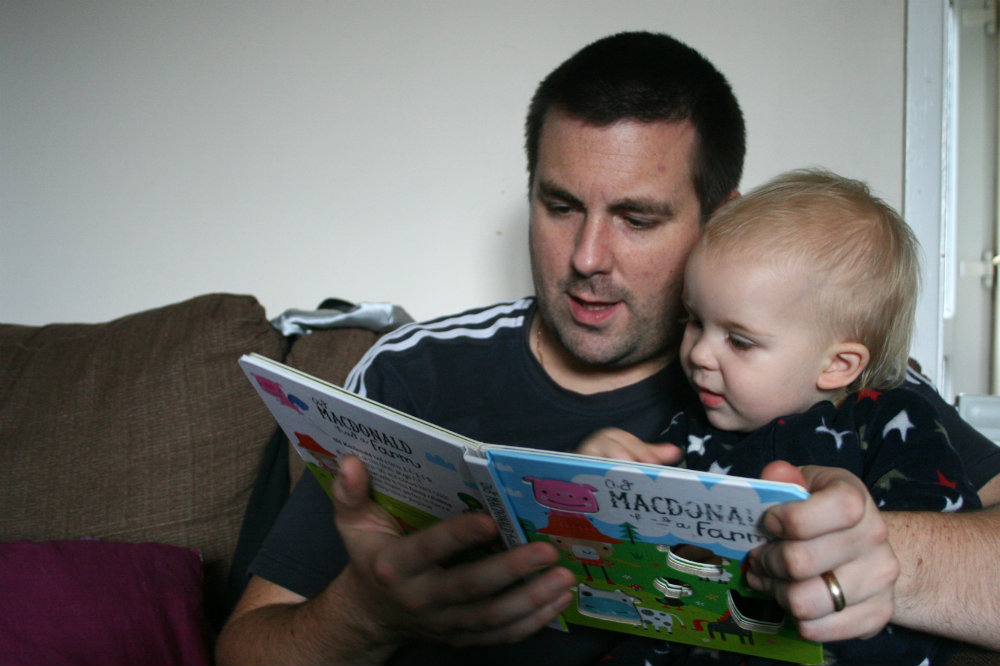 His favourite of the month is Be Confident, Little Lion* by Tiziana Bendall-Brunello and John Bendall-Brunello. There’s one particular page that has lots of animals running away from a very loud Lion roar, and he really enjoys pointing to each animal and hearing the noise they make. He can’t quite do it himself yet, but that doesn’t stop him trying. It’s pretty cute to listen to! 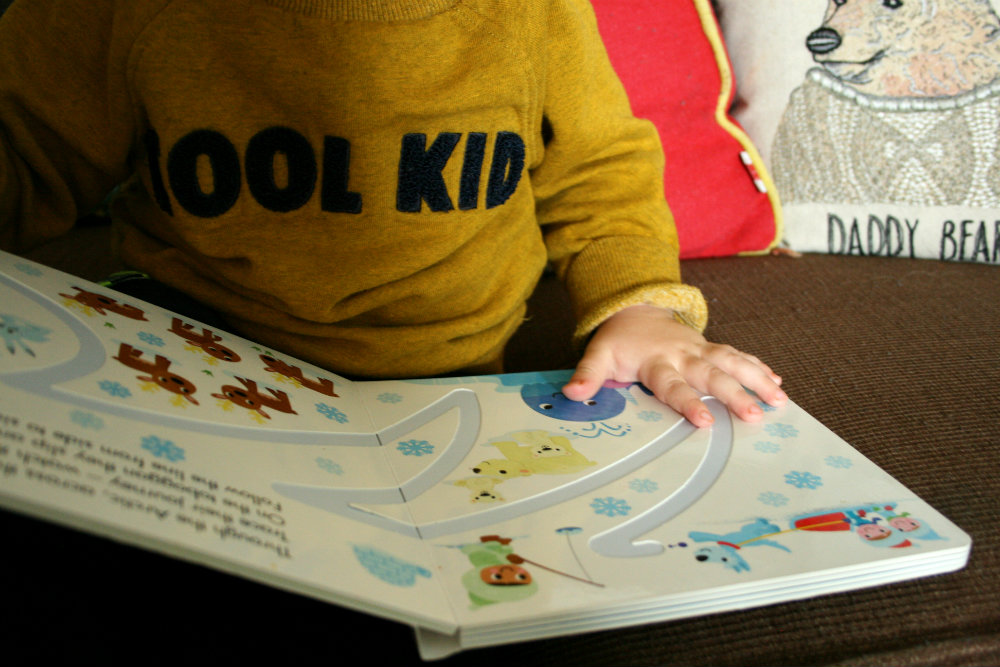 He also loves this Follow Me book that we were sent for being part of the Books & Pieces Parent Panel. I love that it’s such an interactive book, and the added engagement means he’s paying much closer attention to it. There’s a page with fish on, a little dog, these snowy animals and even some aliens! 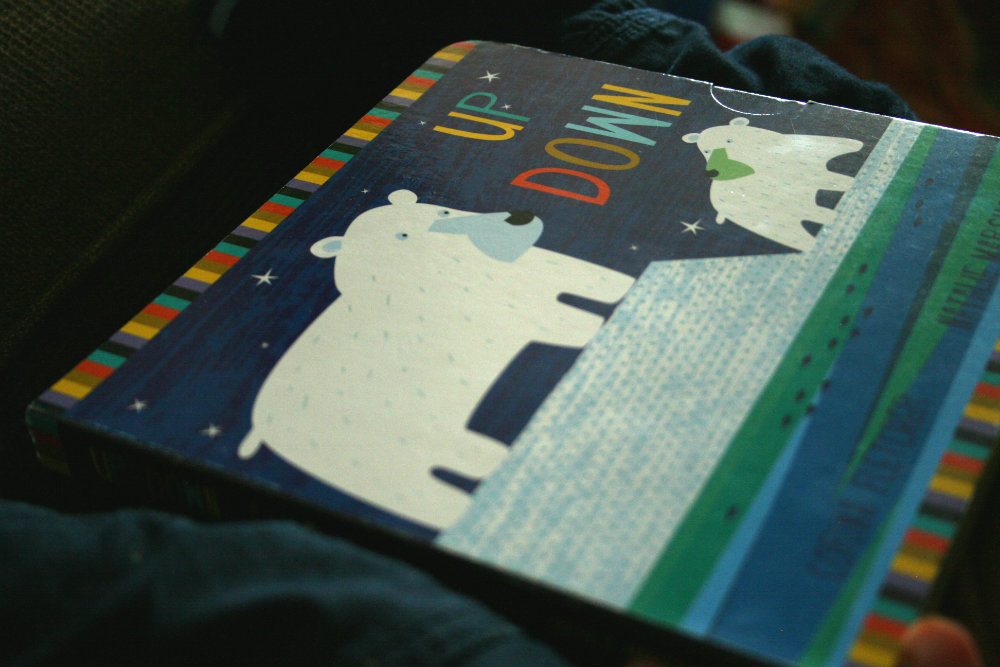 I’ve found that any books that have an interactive element go down well with Pickle! This Up Down Across book (another one from Books & Pieces) has sliding panels that he takes great delight in slamming back into place once they’ve been pulled up or out. There are so many books I’d like to get him for Christmas too – there’s no such thing as too many books, right?

Whenever I can wrestle him away from the toys with wheels (boy, does this child love anything that he can push, roll or spin!), I have a collection of animal toys that I’ve been using to further reinforce animal sounds. We’ve got a lovely cat hand puppet that we received from Rhythm Time that he likes to carry around in his mouth for some reason (honestly, he’s a right fruit loop sometimes!), and a gorgeous selection of wooden animals from SRI Toys* that fit together to form a jigsaw. He’s not yet into imaginative play – which, as a theatre graduate, is killing me(!), but with plenty of practice, I’m sure he’ll get there. 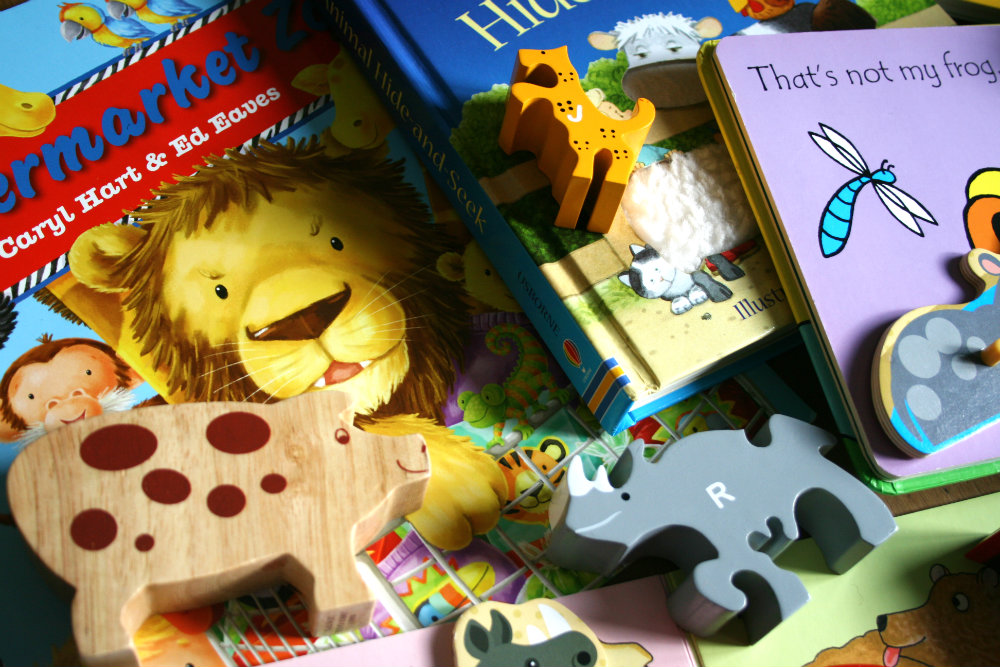 Aside from the very obvious Old MacDonald, there’s such a wealth of nursery rhymes and songs that lend themselves to learning animal sounds. I won’t bore you with detailing all the different ones I’ve been singing but this YouTube video has PLENTY of inspiration should you be struggling:

I’ve also tried (with varying levels of success) to incorporate animal sounds into nursery rhymes we loves that wouldn’t ordinarily have them in. For example, Pickle can’t get enough of Row-Row-Row Your Boat (anything that involves being moved around is exciting in his book) so whilst I’ve been using some of the alternative verses I’ve come across, I also hunted out some more and found this great post sharing lots of options but every now and then I just throw in a random non-rhyming verse that goes a bit like this…

Over to the farm,

And I just keep going with as many animals that I can think of! Pickle doesn’t care that I never actually finish the verse or that it doesn’t come to a nice concluding rhyme at the end. He just giggles at being rocked back and forth, especially if I get a bit more frantic and I struggle to think of more animals. It’s good fun!

And, of course, what better way to teach about animals than by seeing them in person – and you don’t need to spend a fortune on farm park entrances to do so. Whilst we were out at a National Trust property over half term, we spotted some cows in a field, huddled near a fence and made a beeline to go over and say hello. The toddlers loved it! And it was nice to make it clear to Pickle that animals are real life creatures rather than just cartoons.

The biggest thing I’ve invested in to help get Pickle talking is our weekly Talking Tots class with Jess in Redditch. After a full half term now, I can tell they are really making a difference to how confident Pickle is to speak and try out new words. I can see week on week just how much his comprehension is growing and I love getting new ideas for things to try at home with him. 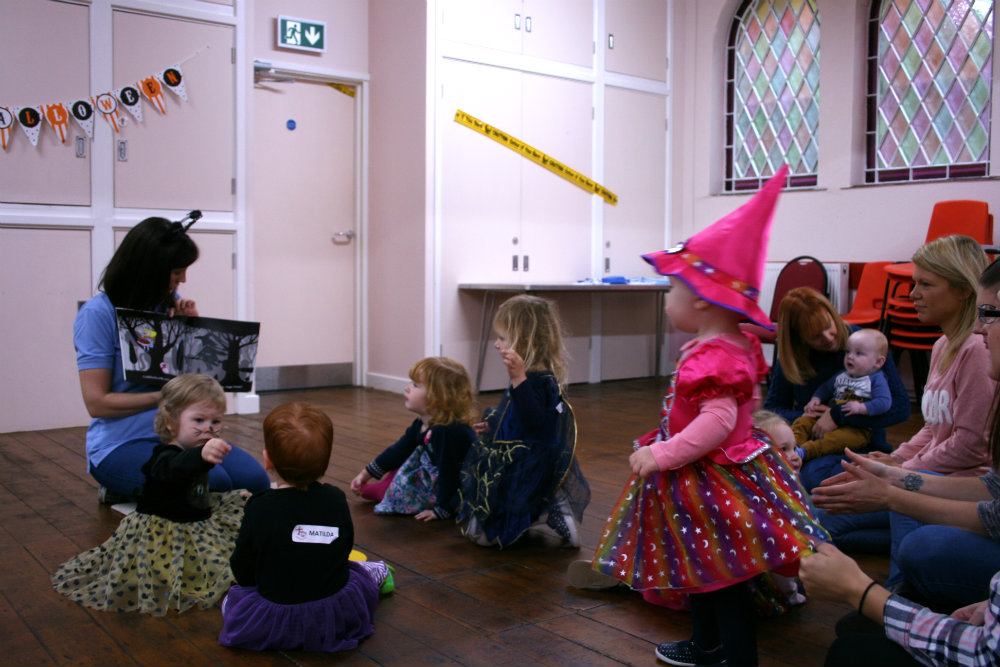 The classes are really well thought out – our Halloween themed class this week was really fun and included jumping up and shouting boo on cue, a fun exercise putting cats, ghosts and bats on a broom and a spooky story.

So, I just need to keep going. Keep making the animal noises, keep talking to him as much as possible, and giving him as much opportunity as possible to try out new words. The amount of praise I give him when he does speak, I’m surprised he’s not constantly doing it – if I could a big cuddle and a kiss for doing something, I’d be doing it all the time, I reckon! Come on Pickle, time to get chatting. 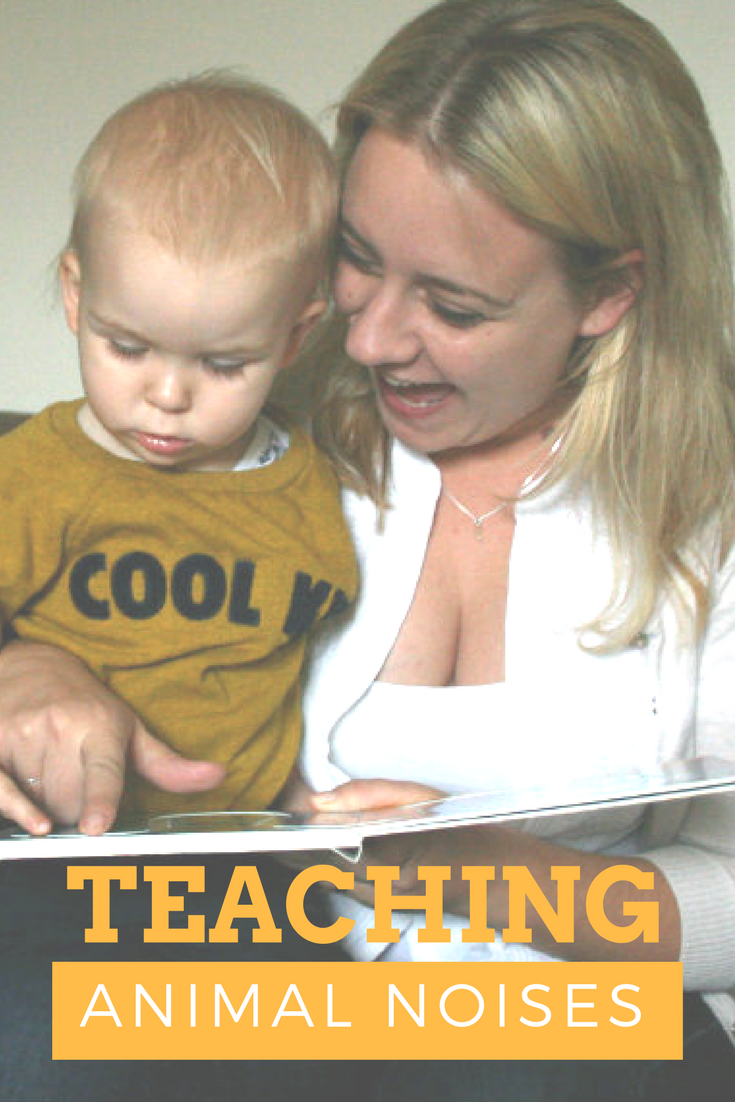 Disclaimer: this post contains affiliate links. This won’t affect the price you pay, but may mean I receive a small referral fee incentive. As part of being on the Books & Pieces Parent Panel, we were sent a bundle of books to read with Pickle that are featured in this article. We also received the set of wooden animals from SRI Toys.