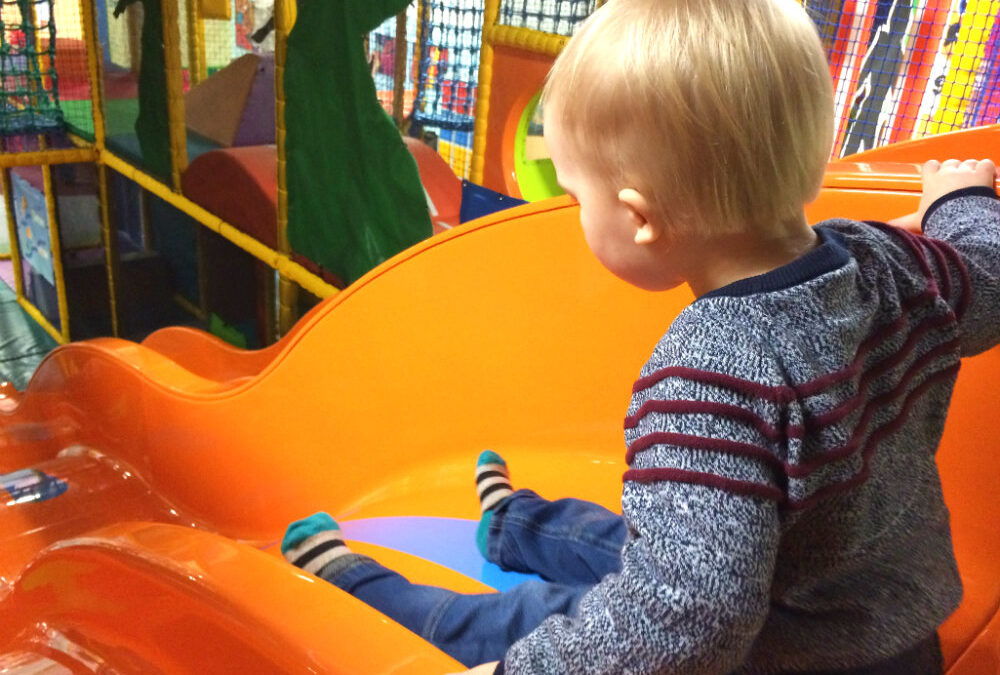 Lots of fun at 360 Play Redditch

If you missed my little announcement on Instagram last week, I’ll soon be rejoining the world of work. Later this month, I’ll be heading back to work for four days a week, and whilst I’m excited about this new change, I’m desperately trying to make the most of the time I have left as a Stay at Home Mom. I feel incredibly privileged to have had the last twenty months with Pickle, and now with just a week to go, there’s still lots I want to do before he goes to nursery. Thanks to a lovely invite from 360 Play in Redditch, one bucket list activity has been ticked off the list: visiting their new play centre in the Kingfisher Shopping Centre. And if you keep reading, you can win a family pass to check out your nearest 360 Play Centre too. 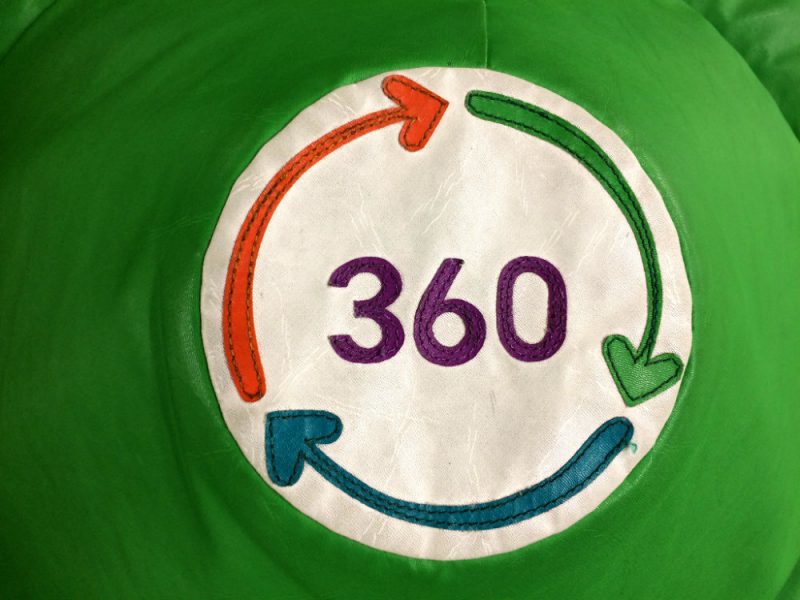 [epq-quote align=”align-left”]Somewhere to go whatever the weather and not just another indoor play centre but something where the whole family could enjoy a day out all year round and which would help with children’s general health and development.[/epq-quote]360 Play is more than just your normal soft play centre. Yes, it has the normal soft play elements you would expect: a massive climbing frame with multi-levels, fun slides and obstacles galore… but it offers so much more on top. It has an imaginative play street which boasts a supermarket, post office, pizzeria, vet and mechanics. There’s a whole section just for lego! There’s a creative station for drawing, painting and chalk. And if that wasn’t enough, there’s even a carousel and bumper cars. It’s a treasure trove of fun, somewhere to delight children (and adults) of all ages.

To start off our outing, we took part in a Kidslingo French class run by Shannon. It’s for preschoolers aged 18 months to 4 years and runs weekly on Tuesdays from 10.30am – 11.00am. As we were rushing to get there from Rhythm Time, we were embarrassingly a few minutes late but arrived just in time to say a quick ‘Je m’appelle Pickle!‘ to the other children taking part, who all displayed some pretty impressive grasp of the language. 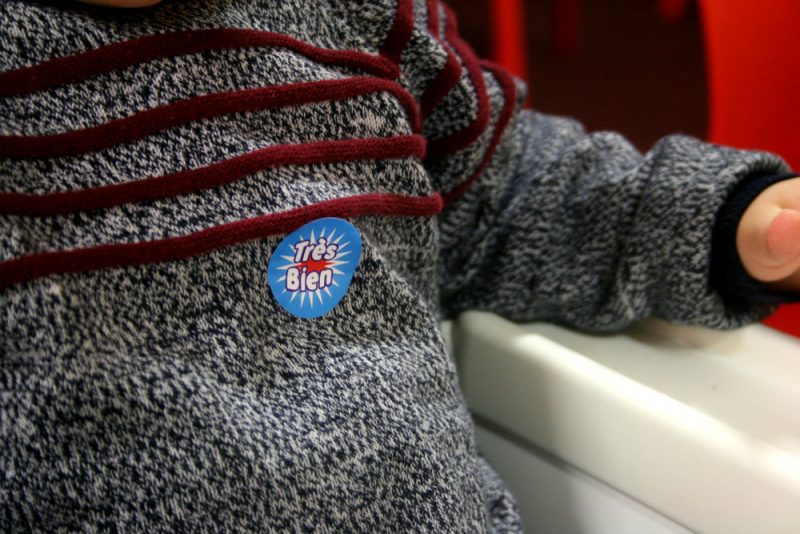 As it was our first time at 360 Play, Pickle was pretty desperate to go off on an explore… so I spent the first five or ten minutes of the class chasing after him as he legged it towards the play area and tantrumed when I tried to return him to the class. Sadly, this is fairly typical behaviour at the moment! We did have some mini successes though – he paid attention nicely during the Twinkle Twinkle nursery rhyme ‘brille, brille, petite étoile’ and he absolutely loved playing with the parachute.

Language is an area Pickle struggles with – he’s not as vocal as his peers in English, and whilst that might put parents off trying to introduce a second language, I’m a strong believer in encouraging languages as early as possible. Not only will it aid their development but I think it’s so important to introduce other cultures to children. It grows an understanding that there are people who live differently, and that we should do all we can to learn about and appreciate that difference – rather than being scared or confused by it.

As soon as the class was over, Pickle was off! Keen to explore the play area, he wasted no time getting stuck in. He was absolutely fascinated by the ball area (as was I!). Rather than a typical ball pool, there’s an area with vacuum shoots – even one that sucks the balls up and deposits them in an overhead funnel… Once the timer runs out, the funnel opens and all the balls rain down! Pickle and I liked to see how many balls we could manage to put up there before the timer ran out – I’m not sure who enjoyed themselves more to be honest. 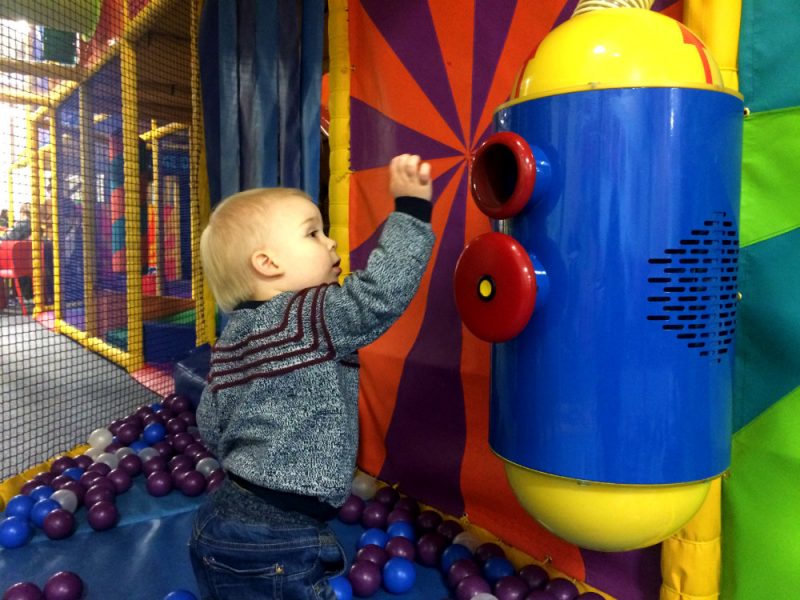 Although it’s something I’d like to encourage him to do more, Pickle wasn’t particularly fussed by the imaginative play (which pains me as a theatre graduate!), but that didn’t stop him enjoying ‘driving’ the fire engine. He even made a few friends – and I was pleasantly surprised how nicely they took turns behind the steering wheel.

I don’t have any photos of us, but we also had a go on the dodgem cars and carousel. I let Pickle sit in the driving seat and I just gave him a little helping hand around the corners – I think he was a bit bemused to be driving an actual moving vehicle! SUCH good fun though, and you can ride both the dodgem cars and the carousel as many times as you like during your play session. 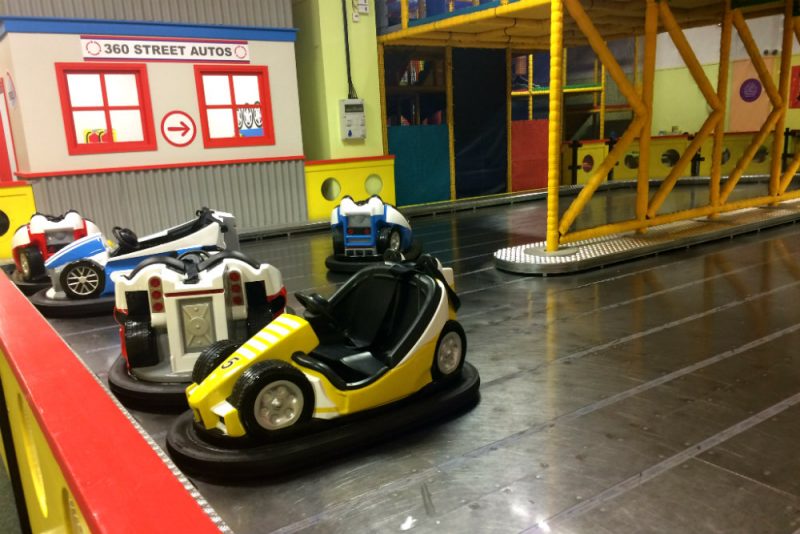 Although we’ve been to other soft plays where parents can clamber on with their children, I’ve sometimes felt a bit silly playing with Pickle – a bit out of place and overly protective. That’s definitely not the case at 360 Play! In fact, I think you’d feel silly sitting at the side really. It’s perfectly set up so that parents aren’t only encouraged to play but you won’t feel like a hunchback having to duck your way through the play area – there’s plenty of space and no need to crouch all the time, perfect. 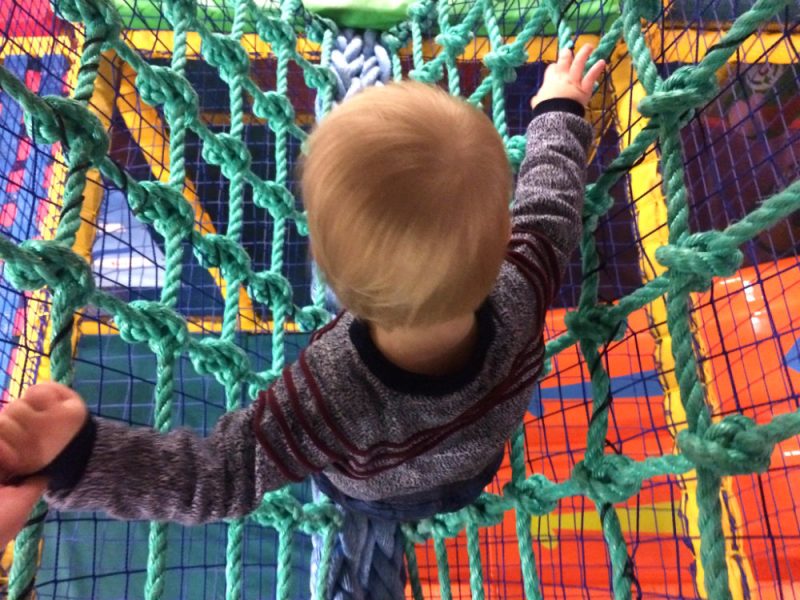 I know I’m biased, he’s my son… but I’m always so proud of Pickle when he’s off adventuring. He amazes me with his bravery – he wasn’t phased at all by walking over this rope bridge, or going across a transparent walkway. He just gets on with it, eager to explore the next section. I know children don’t really know fear at this age, and whilst I do want him to be respectful of dangerous things, I hope he is always this courageous!. 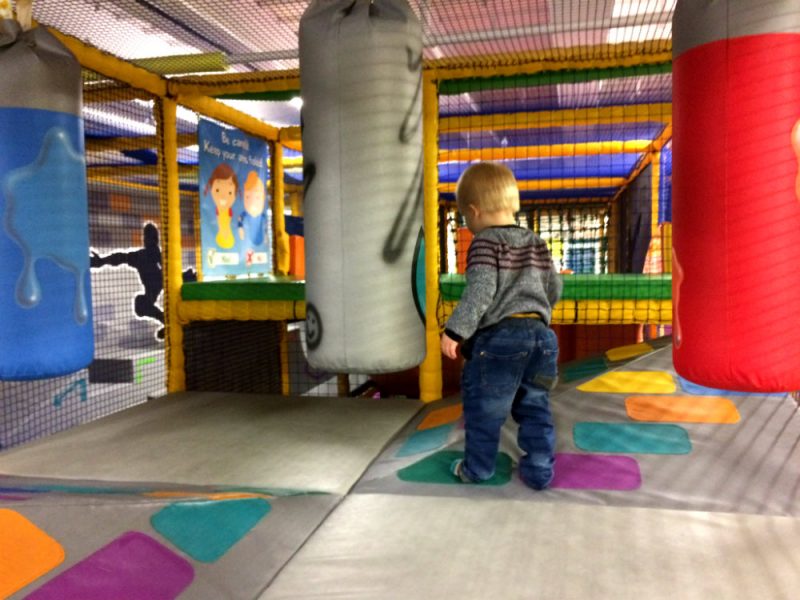 That said, he developed a funny relationship with slides during this play session! If you’re a long time Little Pickle’s Mom reader, you may remember a post I wrote recently about him going down the slide. He was quite happy taking himself down the slide in the toddler area, laughing with a friend he made in there whilst her Grandma and I watched on proudly, but then… all of a sudden… he just wanted to sit at the top instead. And ever since, it’s been really tricky to get him to slide down on his own! He’s not scared or upset, he just seems to think it’s hilarious to just sit there. I wonder if it’s maybe because it means I give him lots of attention to try and get him down? But anyway, he was the same when we visited Hatton Country World this week too. What a monkey. 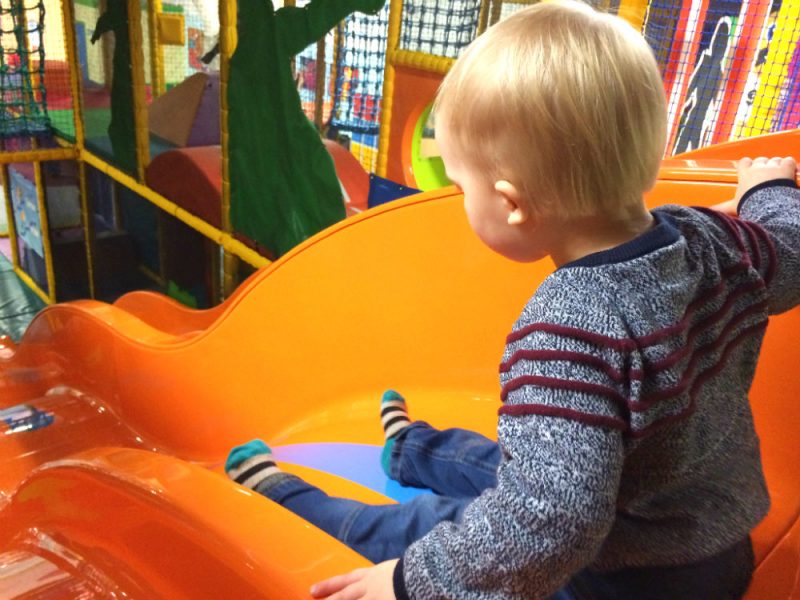 We had great fun going down the big bumpy slide together – it really goes quite fast! I could just about see his smiling face as we slid down, but next time, I’d love to see LPD and him going down together so I can properly watch his enjoyment. I’m not sure I’m quite ready to let him slide down totally on his own… that feels far too grown up for such a big slide!

A Spot of Lunch

With all our energy expended from playing, we definitely needed a hefty lunch, so I ordered us some food from the 360 Play Menu. As you’d expect from a children’s play venue, the children’s menu was fairly varied and offered lots of choice to suit all diets and fussiness levels – but I was a bit gutted they didn’t offer mashed potato as that’s Pickle’s favourite! Instead, I ordered him sausages with peas and some chips as a treat and I went for a chicken pesto pasta dish. 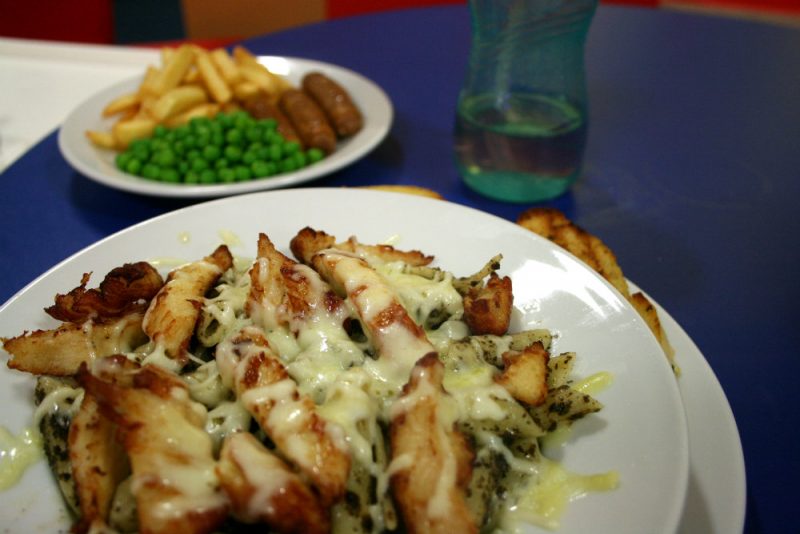 Pickle ate his food relatively nicely, which is a bit of an achievement these days, although I wish I’d have had the foresight to bring some of his own cutlery with us. I couldn’t see any child sized cutlery on offer at 360 Play (but I may have missed it), so he mainly just used his fingers. I was hoping for a few more vegetables with my pasta – but I can’t complain as it was exactly as described and hit the hunger spot nicely!

Is it worth it?

When it was announced that 360 Play was opening in Redditch, I remember hearing a lot of moaning from parents about the cost of entry – especially as there’s a registration fee and adults are charged for their admission too. If you’re reading this and aren’t sure whether the experience warrants the price – I’m here to tell you to give it a go. We easily spent four hours there, and would have spent longer if Pickle hadn’t fallen asleep after his lunch. There aren’t many soft plays I’d happily spend that amount of time in. 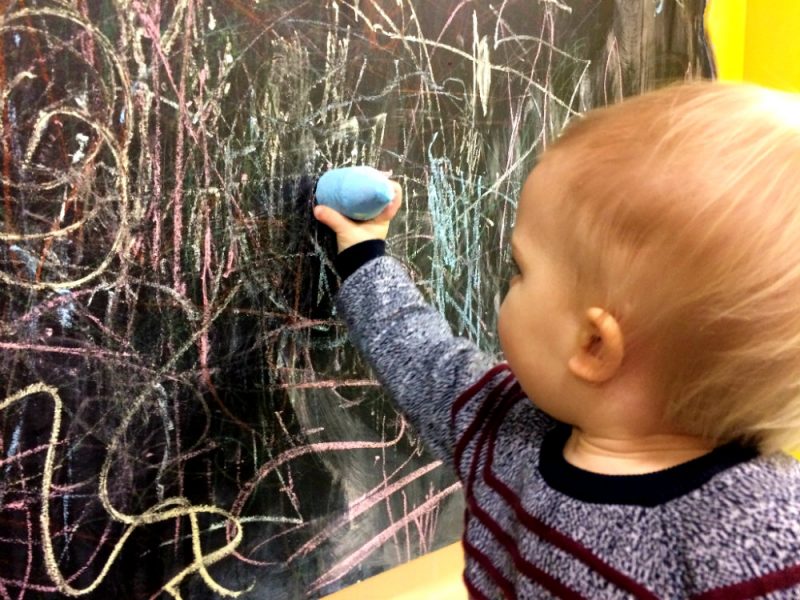 Not only are the vast array of activities available engaging and exciting, the fact that you’re paying for an adult ticket makes sure that you, as the parent, make the most of the play too. It’d be easy to let your little ones run off and enjoy themselves (and I’m not saying there’s anything wrong with making the most of having some hands free time to enjoy a hot drink in peace!), but I know I’ll remember and treasure the fun we shared together. For those few hours, I switched off from my phone, wasn’t worried about the ever-growing pile of laundry at home or even thinking about what we’d have for dinner that night… I was just enjoying playing with my little boy. And that’s definitely worth £3.50 in my book.

We’ll definitely be going back! I can’t wait for all three of us to go together – I think LPD will be particularly impressed with the imaginative play area and the lego section. It is more expensive than other local soft plays, but it’s also a much more enriching, exciting and educational experience. The added bonus for me was that Pickle was exhausted by the end of it and had a really nice long sleep in his pushchair, allowing me to have a peaceful wander around the shops afterwards – and I can’t remember the last time I did that! 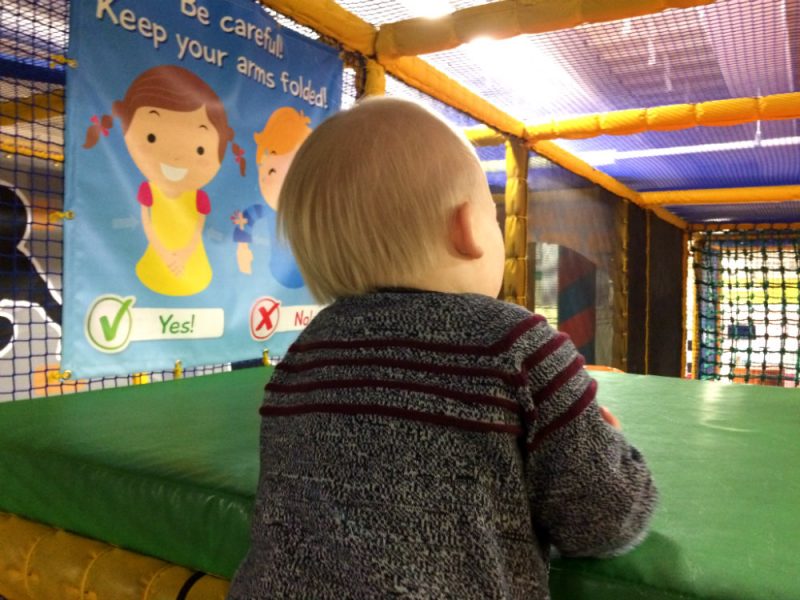 The 360 Play in Redditch is located in the Kingfisher Shopping Centre, with the entrance being next to New Look. It has the following opening hours:

And the entrance costs (correct at time of publication) are:

You will also need to pay a one-off £5 Family registration fee on your first visit.

If you’d like to try out 360 Play for yourself, either in Redditch or at the other play centres in Basildon, Farnborough, Leicester, Milton Keynes and Stevenage, enter the competition below for the chance to win a Family Day Pass (which entitles two adults and two children to entry on any day outside of the school holidays, valid until 30th April 2018). 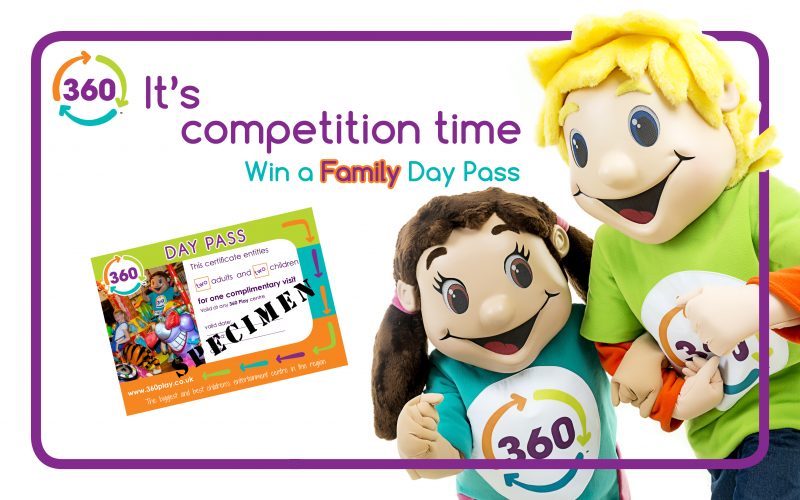 Disclaimer: Pickle and I were invited for a play session at 360 Play in Redditch, including the Kidslingo French class, for the purposes of this review. We bought our own food. All opinions and views remain my own, and as always, 100% honest.

The Baby Show 2017 at the NEC Birmingham