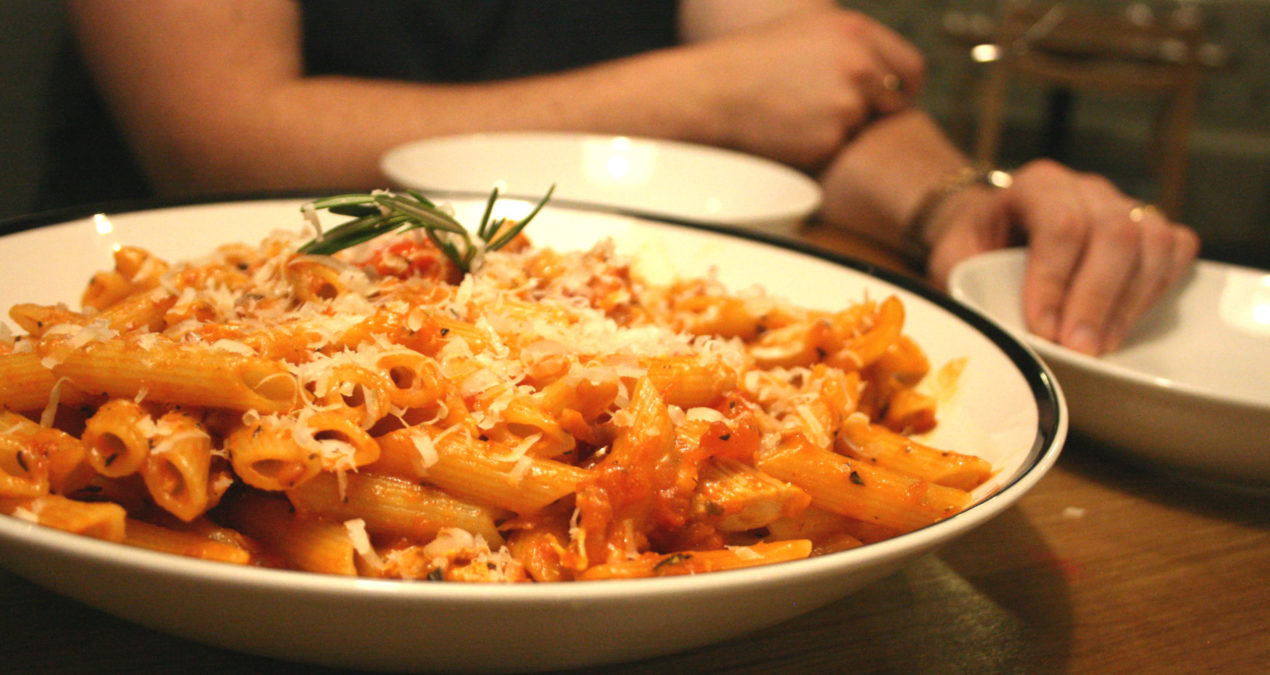 Dining Out with La Famiglia at Prezzo

Before Pickle came along, LPD and I would often eat out. Oh, those were the days… when we didn’t have a baby-bedtime to rush home for or an evening of being too tired to do anything but mindlessly watch Netflix to look forward to. Lack of available time and a massively reduced monthly income mean that dining out is very much classed as a luxury these days, but that needn’t be the case really and an early Sunday dinner at Prezzo with La Famiglia has really made me realise it’s far more do-able than I thought. 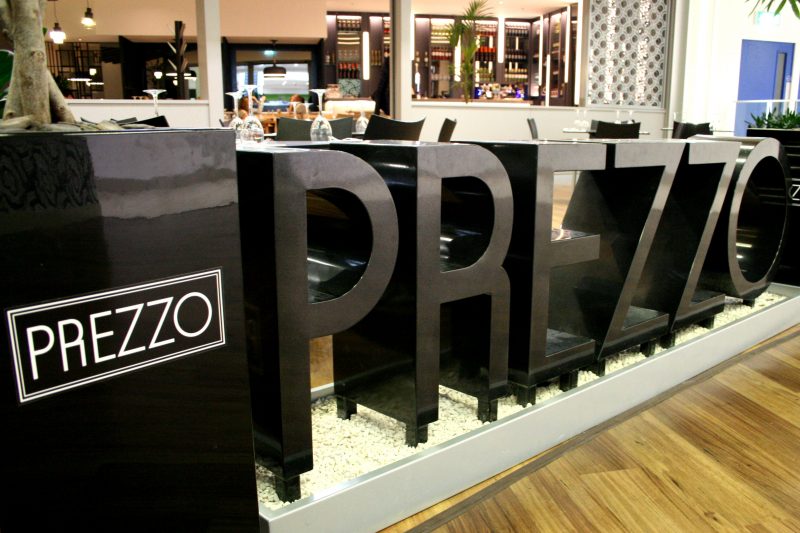 After being invited to take part in the #PrezzoLaFamiglia challenge set by BritMums, I booked us in to our local Prezzo restaurant in Redditch for 4pm on Sunday. Embarassingly, it was only the first time I’d visited the Redditch restaurant. My excuse? It’s fairly new and when I used to work in Stratford-upon-Avon, it was easier to pop to their Prezzo after work (particularly good for a pre-theatre meal!).

The whole point of us visiting was to test out the new La Famiglia sharing pasta dishes, and as far as dining concepts go, this hits the spot for families perfectly – hence the name, which means family in Italian. The idea is simple: one big bowl of pasta that feeds everyone (or at least: two adults and two children). 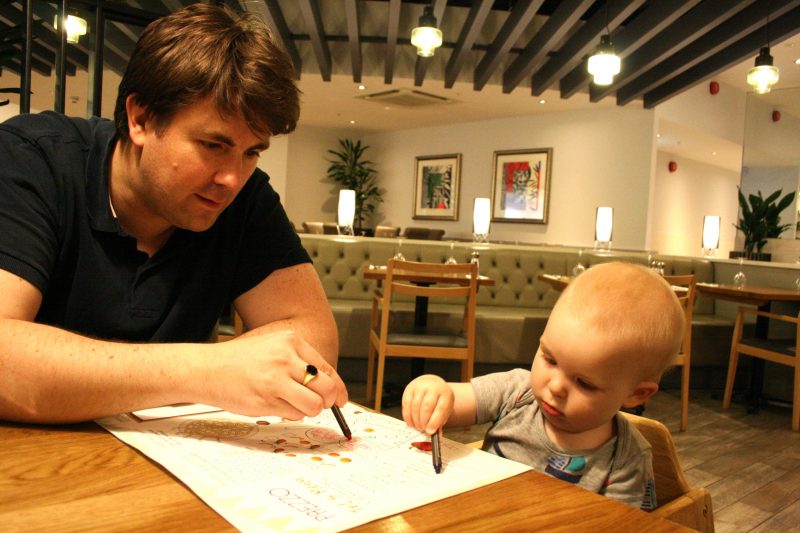 Before I became a parent, I think I’d have thought a big bowl of pasta to share was a ludicrous idea. Surely one of the main benefits of eating out is that each person can choose exactly what they want to eat and everyone has the luxury of enjoying their own meal rather than everyone having the same dish like at home… but as a Mom of a toddler, it allows me to recreate the routines and dining rituals we have at home whilst we’re out. And as any parent will know, sticking to the norm as much as possible goes a long way! And we all know babies want to eat whatever is on your plate anyway, so at least when we’re all sharing, it doesn’t feel like half your own meal is just being thrown off the sides of the highchair!

Although I imagine the sharing dish was designed with older children in mind, as we’ve done baby led weaning with Pickle, we’re used to all eating the same things – and pasta dishes happen to be his favourite. We even tried him with a little bit of the caramelised garlic bread, which was a real treat for a one-off and as a starter, it really whetted our appetite for what was to come! 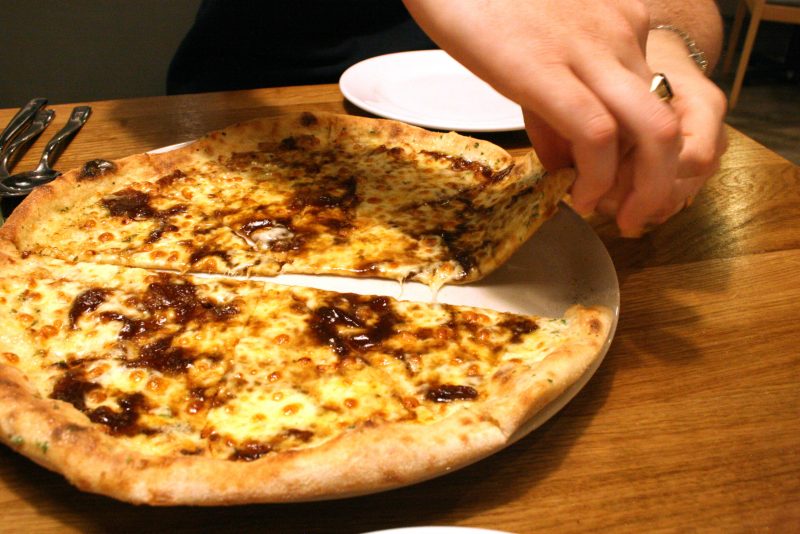 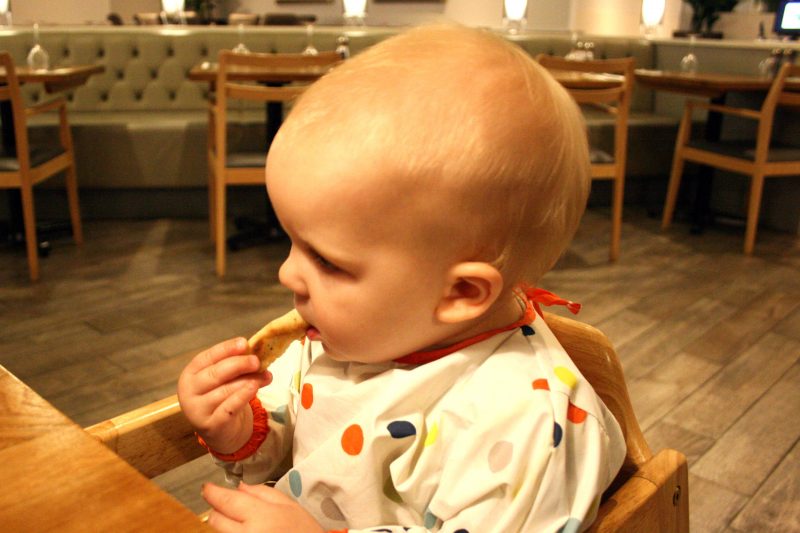 I let LPD choose which of the four pasta dishes to go for, and it was no surprise to me that he went for the Penne Alla Rusticana (seasoned chicken, pancetta, peppers and rosemary in a creamy pomodoro sauce). I was quite tempted to opt for the Carbonara, but I’ll have to save that for another day. Having a reduced option to choose from actually makes it so much easier! No more deliberating over what to have and ZERO food envy. Win win. 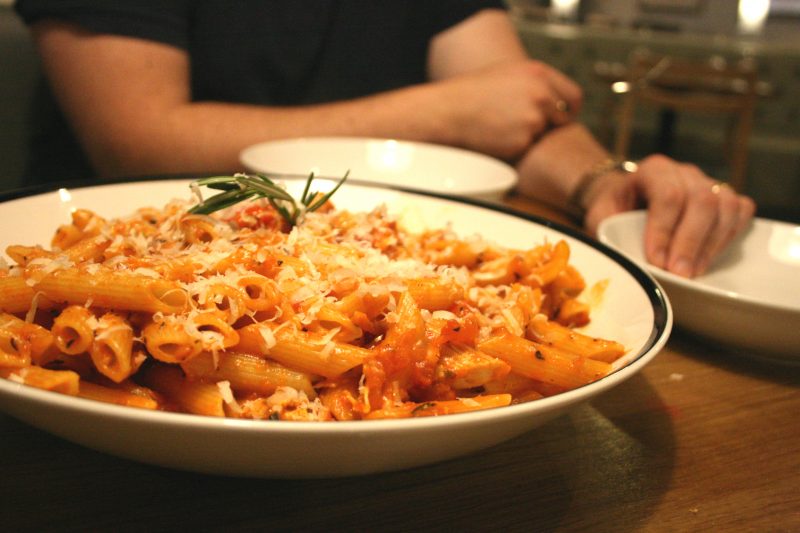 The pasta itself was delicious. And perfectly sized to feed two adults and two children. For us, as a family of two (very greedy adults) and a baby, it was very generous but LPD did his best to polish off as much as he could! Pickle can be a bit funny with some meals. Sometimes he’ll eat the whole lot really nicely, and other times he’ll just want to throw everything as far as he can, hitting as many surfaces as possible. Thankfully, he couldn’t resist the tasty Prezzo pasta and happily ate it nicely – we didn’t have to do too much clean up afterwards! 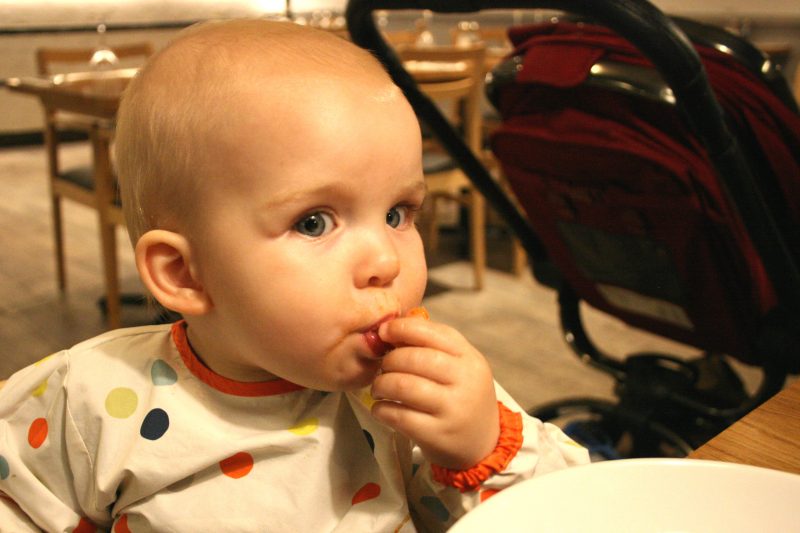 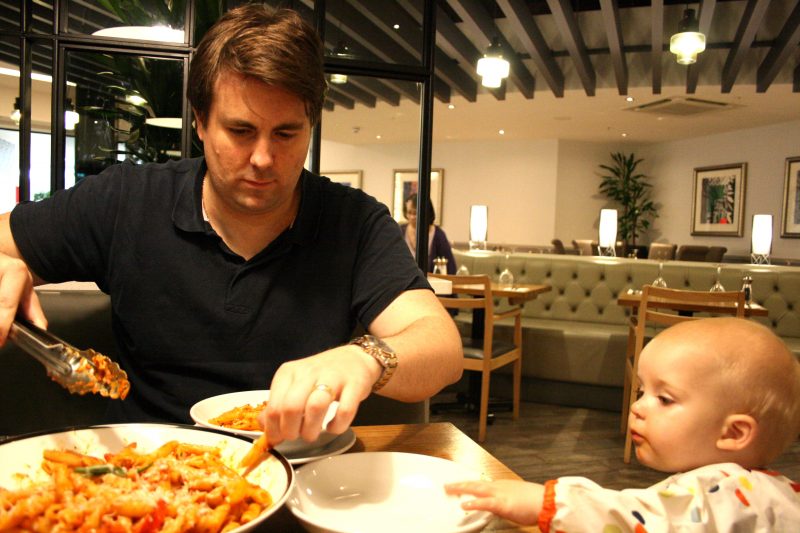 I think we picked the perfect time to go. It was pretty quiet in the restaurant at 4pm on a Sunday, which meant I didn’t really need to worry if Pickle was a bit vocal! It also meant that if he got a bit restless at times, I felt like I was able to take him for a little wander around the unoccupied tables. Before we came to Prezzo, we’d just bought him his first pair of shoes so I think he was keen to test them out a little bit! 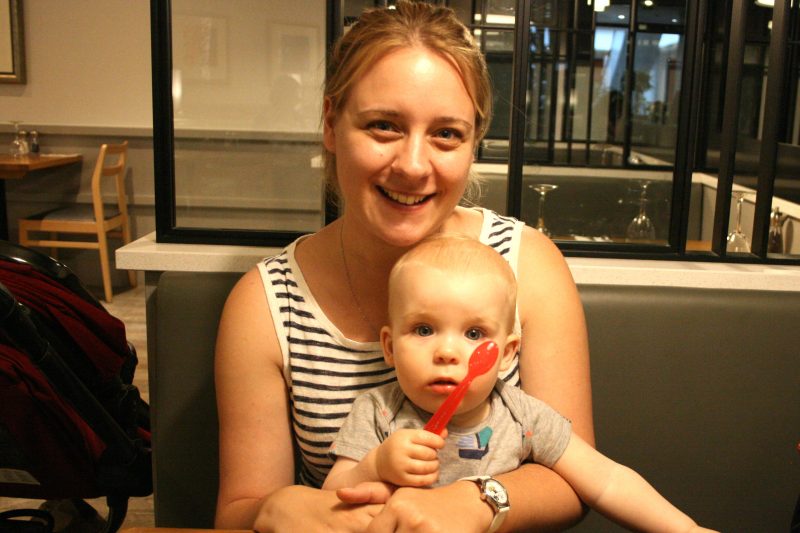 I love this photo with his spoon – he’s ready for more! We bought this little red plastic spoon with us (that makes it sound like I was really prepared, but really… it just happened to already be in the change bag! Conveniently.) but Prezzo also provided a smaller spoon for him anyway which was really cute and thoughtful. He also enjoyed some mark making on the children’s drawing mat! I was quite impressed with his scribbling…! Must make more of an effort to do more of that at home. 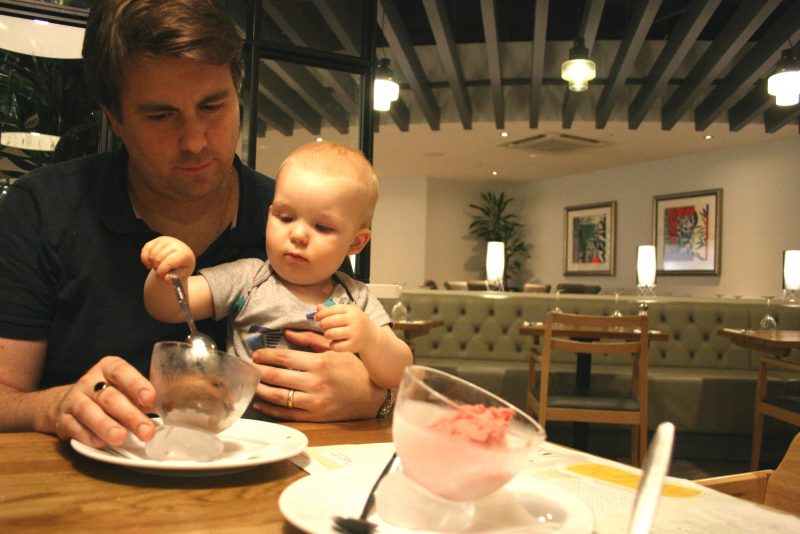 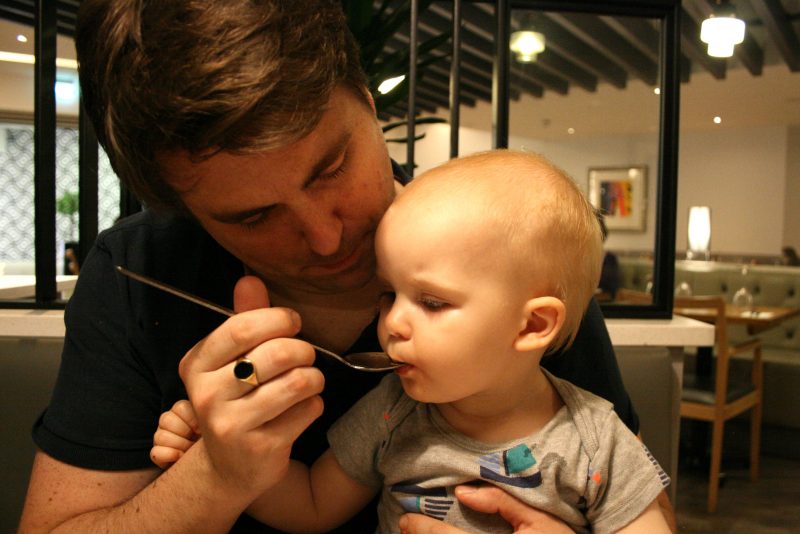 No meal out is complete without a pudding! And whilst LPD opted for a scoop of delicious chocolate with sea salt gelato, I strayed from my usual flavour choices and decided to try blood orange sorbet after our waitress recommended it – GREAT recommendation! It wasn’t something I’d usually go for but I was so glad I did.

Pickle isn’t usually allowed ice cream, but seeing as he’s already tried a bit of garlic bread, we figured a little bit of pudding wouldn’t harm him and he really enjoyed sampling our sweet treats. Funny how he suddenly decides he can behave nicely and sit contentedly when there’s ice cream on the table? He’s not stupid, this kid.

The Theatre of Dining

The whole thing was quite the experience! We even ooh-ed and aah-ed when our waitress brought over the sharing dish, the sharing utensils and our bowls. This either goes to show just what a fun family activity it is, or just how little LPD and I get out these days… I like to think it’s the former.

Between the two of us, LPD was definitely the hero of the show, attempting to eat as much as he could so that we could leave with empty plates. I was impressed that I was able to moderate my portion sizes, making sure I didn’t wolf the whole lot down… but mainly because I wanted to ensure I had room for pudding! Eyes on the prize, the whole time.

All in all, we were really impressed. Eating out wasn’t the stress fest I thought it would be, and more an enjoyable feast. If you’re looking for a dining out option that doesn’t break the bank and helps to keep your little ones in some kind of routine, La Famiglia is the dish for you. Give Prezzo a go, I’m sure you won’t be disappointed.

Disclaimer: This post is an entry for the BritMums #PrezzoLaFamiglia Challenge, sponsored by Prezzo. In order to test out the meal, we were given a voucher that covered our soft drinks, garlic bread starter, a sharing dish of pasta and ice cream. All opinions remain my own, and as always, 100% honest.

A Year of Breastfeeding

Decluttering and Selling on eBay