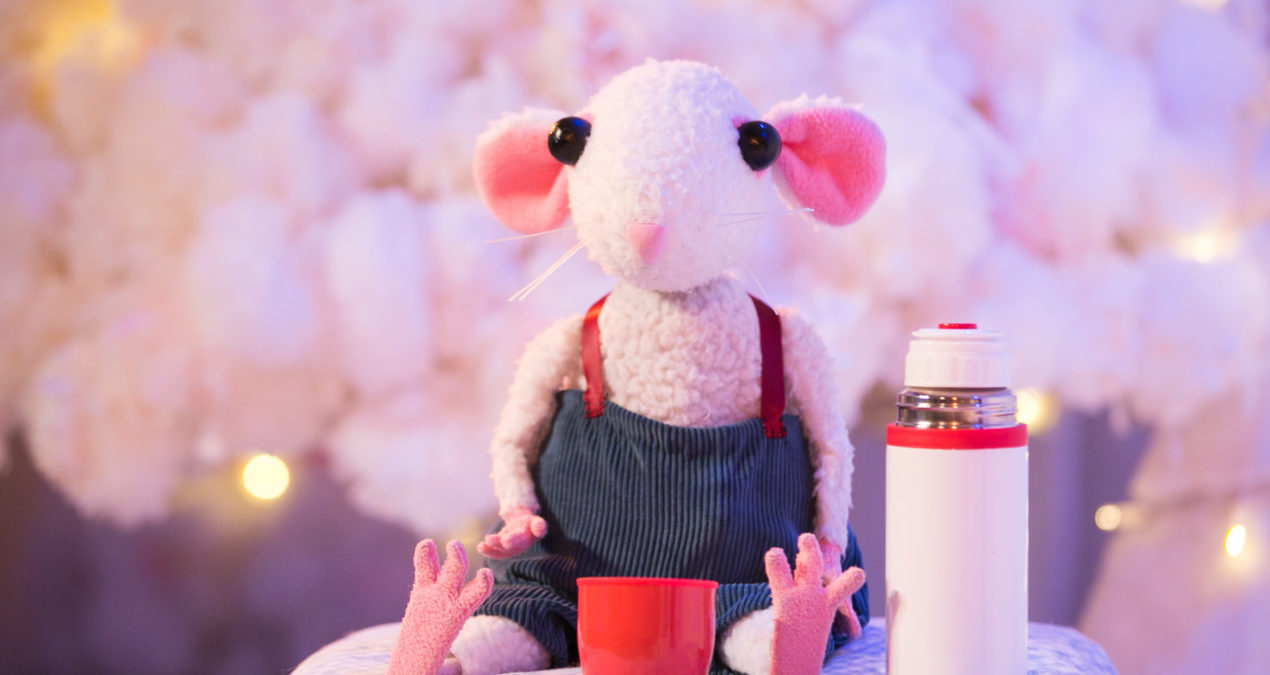 Going to the theatre means different things to different people. For me? I like to be charmed. I like productions that are warm, and charismatic, that have me falling in love with characters, places, stories or, well, anything. I like to feel like I’m stepping into a different world – where anything is possible. When Pickle and I walked into the Helen Martin Studio at Warwick Arts Centre on Friday for their festive offering of Snow Mouse, I immediately had a good feeling about the show – the studio is completely decked out as a snowy wonderland, with white pom-pom trees, speckled with hints of pink and blue, fairy lights, soft plush cushions and even long white snow-like benches. It must have been really breath-taking as it completely stopped Pickle mid-cry after a bit of a tantrum sparked by having to leave his wellies outside. Boy, does this kid love his wellies. 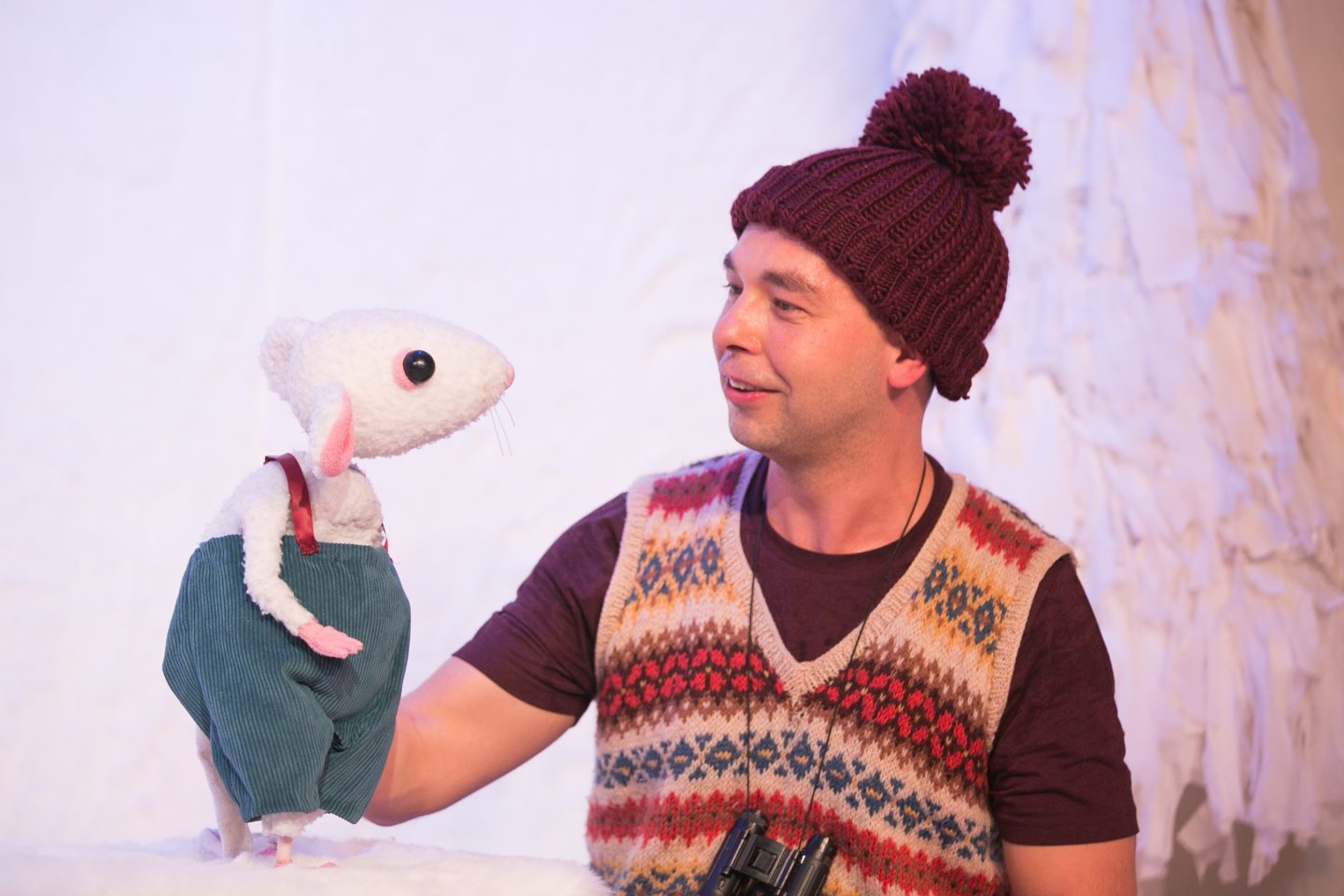 Snow Mouse, a co-production between Travelling Light Theatre and the egg at Royal Theatre Bath, begins as every snowy adventure should – the donning of warm shoes, a big coat, gloves, hat and scarf. The sole performer is wonderfully lovable with a twitchy, nervous kind of energy that is humble, welcoming and innocent. He crunches his way through the snow and there’s lots of fun to be had with snowballs, of varying sizes! Not before long, (but long enough for a few ‘Where’s the Snow Mouse?’ questions from some of the little audience members – CUTE), he investigates the sound of snoring to find a new friend to play with: the Snow Mouse. Together, there’s lots more fun to be had including a picnic, ice skating and some pretty acrobatic sledging! It’s a simple story, but has the feel of a grand adventure.

Despite being super excited about this production, I felt like I was going to have a fight on my hands with Pickle. Our performance started at 11.30am which is usually bang on Pickle’s nap time, and despite my best efforts to get him to have an early nap in the car en route, he resisted. So he was tired, probably a bit hungry and desperate to explore. I thought arriving early would be a good thing – allow him some time to toddle around, get his bearings and burn off some energy so that he would subsequently sit nicely once the show started. I was wrong. He was determined to gatecrash the stage area, which was cordoned off from the audience’s half of the studio by a snake of soft fabric on the floor, which is not a barrier at all in a toddler’s eyes! I did manage to keep him away, but the resulting screams of protest and wails of frustration was getting me panicked. I’m not sure I’d want to stay and ruin the show for everyone else if he continued to make that kind of racket – which wouldn’t be particularly helpful when I came to write this review! I strategically found us a spot to sit at the back of the fluffy floor cushions, on one of the benches – the furthest point away from the tempting stage barrier as possible, hoping that would help. The cries continued. 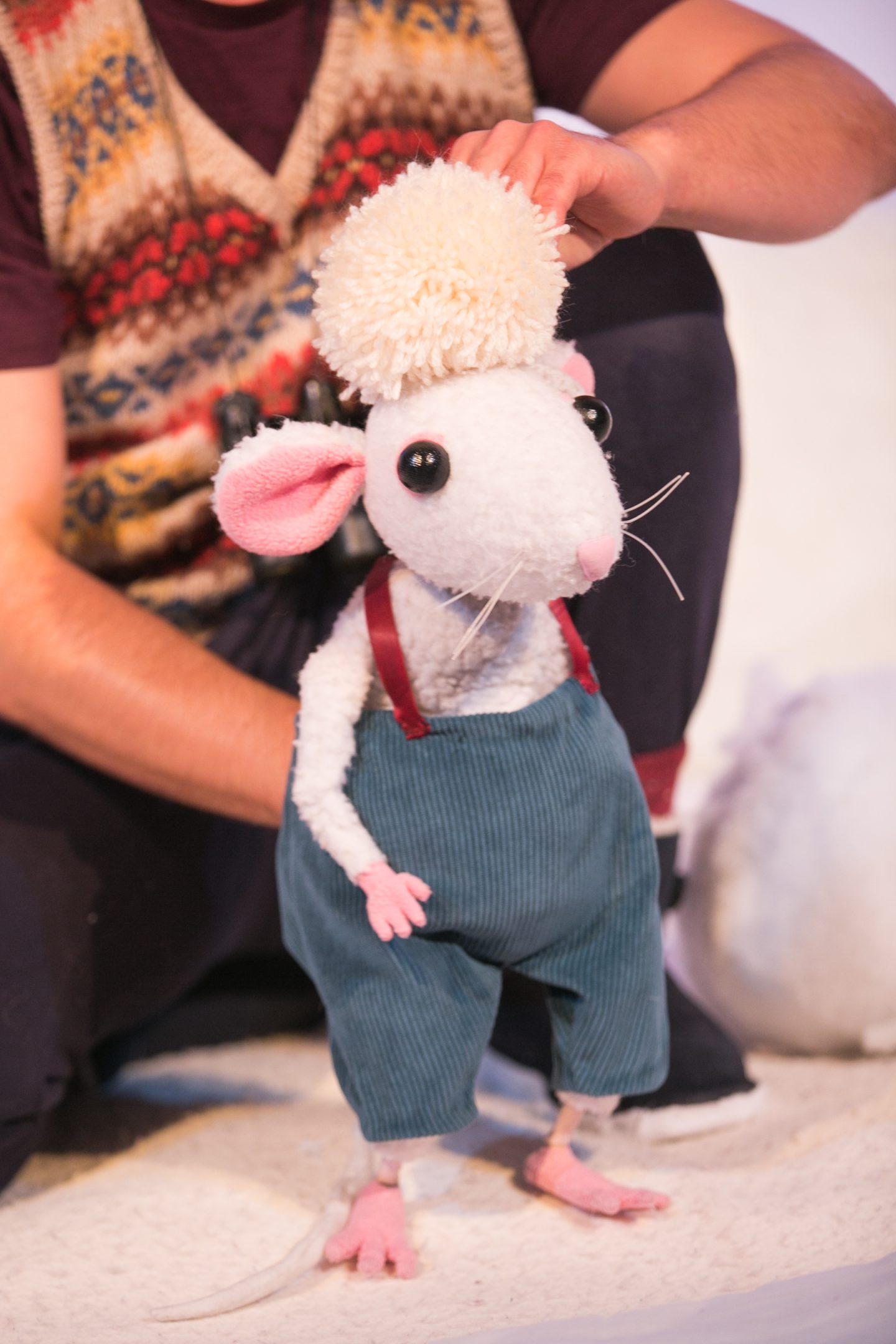 THANK GOODNESS I’m still breastfeeding. It was, of course, milk that came to the rescue, calmed him down and enabled us to have some quiet time before the performance began. All worrying aside, as soon as the lights dimmed and the music began, he sat very nicely on my lap and watched intently – not even trying to wriggle free, for ten minutes at least. I love the idea of studio shows where the audience, parents and children alike, sit on the floor together – it promotes a bit more of a relaxed, comfortable environment that feels more familiar to children – but in practice, it creates quite a few sightline issues. This can of course be combated by the action on stage happening at a higher level, and whilst this was done quite successfully in the second half of the performance, a lot of the action at the beginning takes place on the floor (which is worth considering when you decide where to sit).

Snow Mouse is beautifully created, but the constraints of the studio set-up mean it’s not quite dynamic enough to successfully keep younger toddlers squirm-free. Whilst there is a definite story arch, the pace and tone of the performance remains fairly stable, requiring an intensity of concentration that is a little above the threshold for some (not all) audience members. I was a little reassured to glance across the floor at several points to notice I wasn’t the only parent drastically trying to hold on to a wriggling toddler. 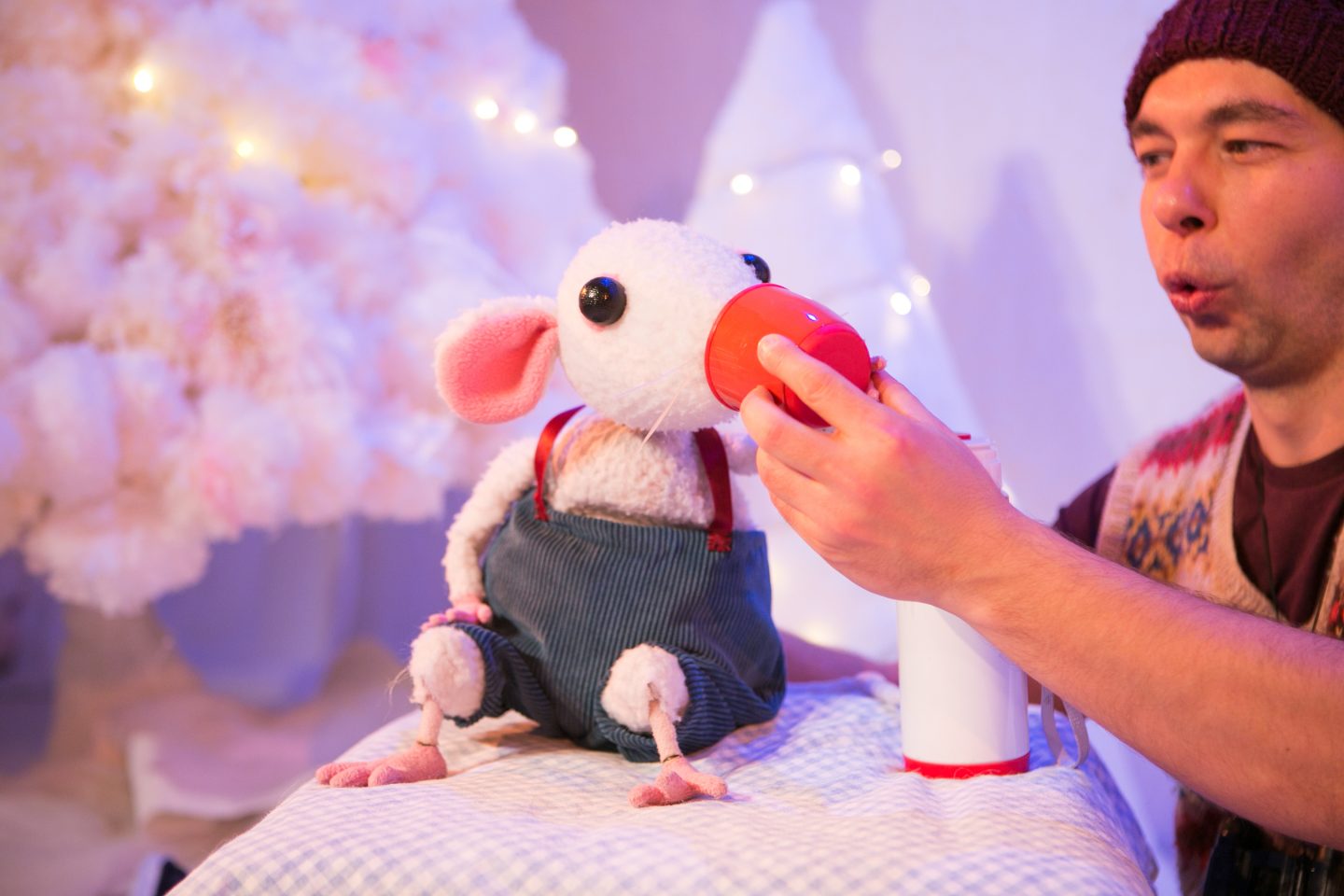 That said, it’s the stage itself that was drawing Pickle in – it wasn’t that he was bored and wanting to explore for the sake of it, he wanted to go and play and join in the fun! Huge great big rag balls and sheets of pretty translucent fabric are pretty enticing, and who doesn’t enjoy throwing snowballs around? Pickle was obviously captivated, and I couldn’t believe it when he even tried to say ‘Snow Mouse’ during a sequence when it was repeated a number of times in quick succession. He really doesn’t say much at all (and has only just started saying Mama properly) so to get a ‘No-Ma’ out of him was particularly impressive, and speaks volumes I think. 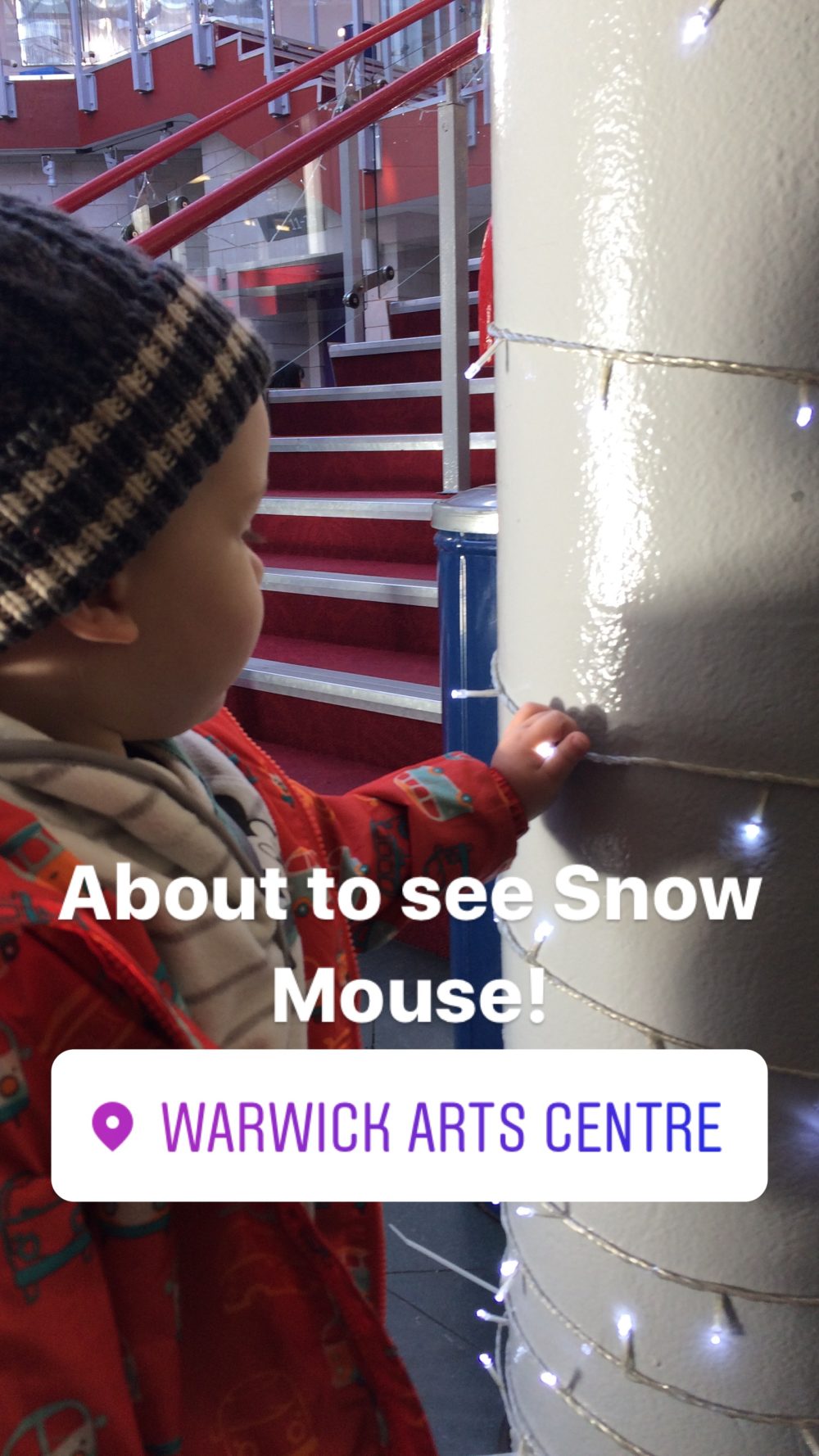 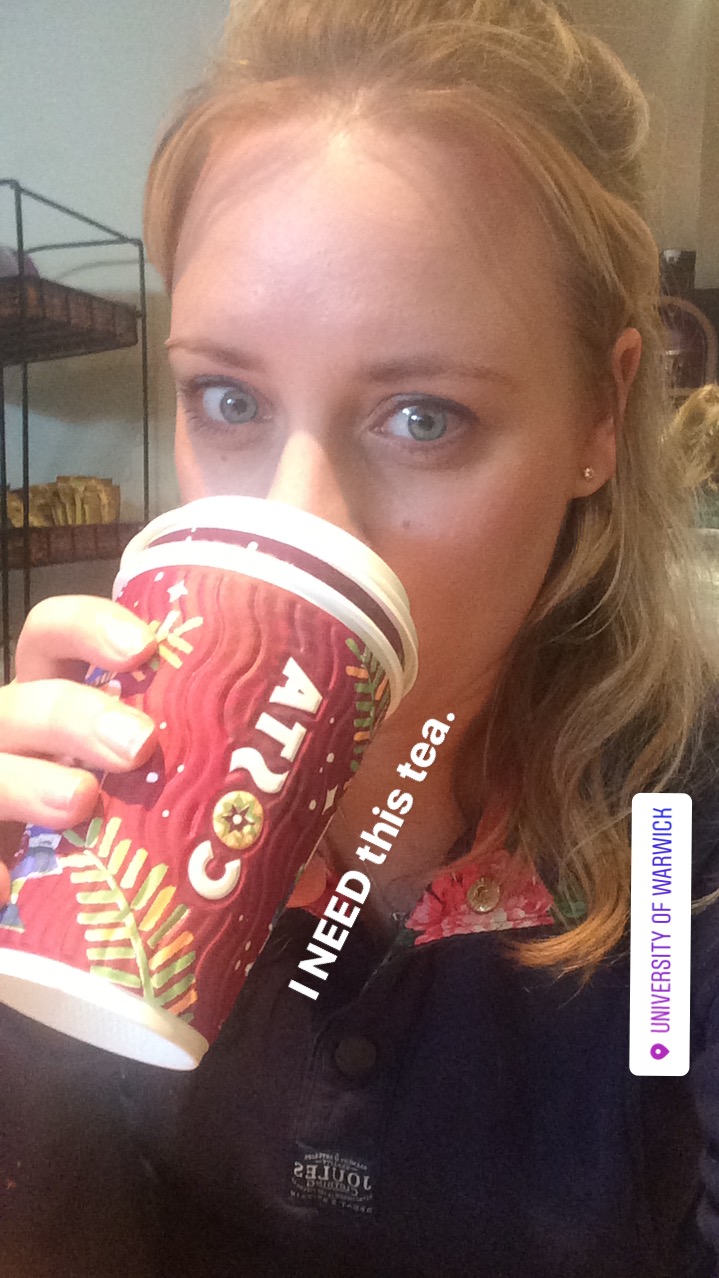 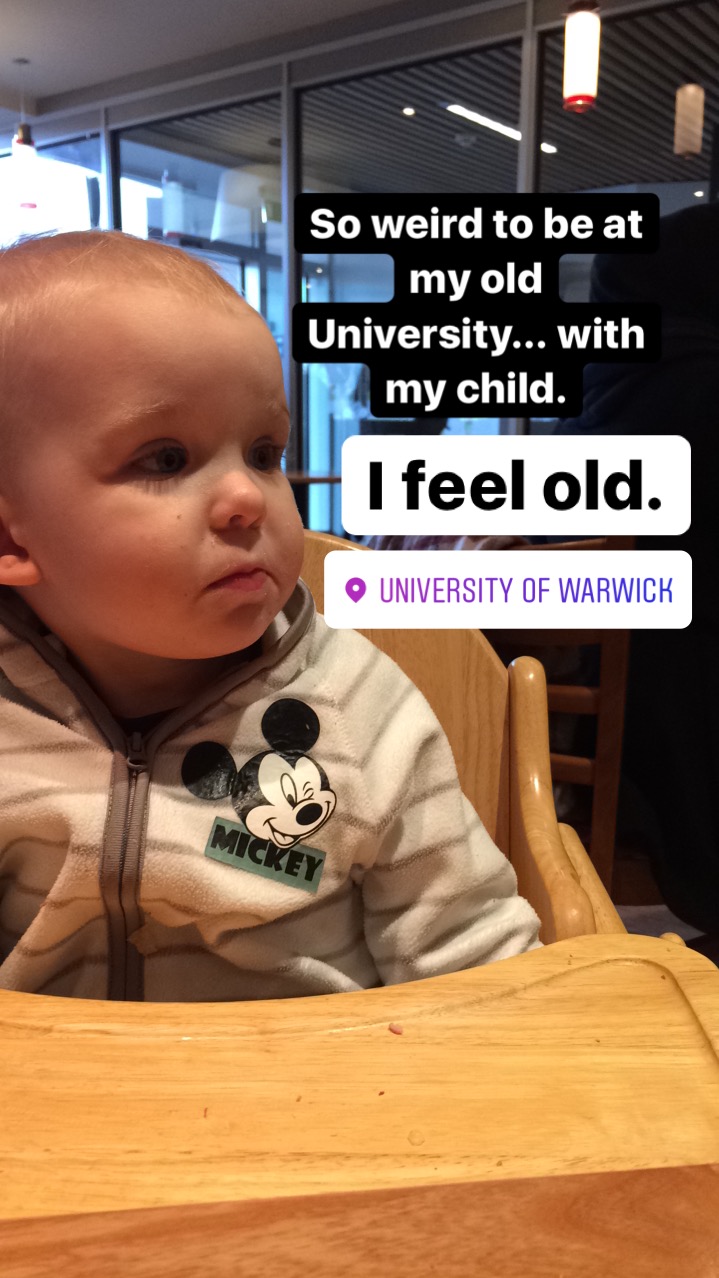 Snow Mouse is exactly the kind of performance I love: full of charm, uplifting and with an intricately gorgeous set design. If you’re looking for some Danish hygge this year, this show pretty much embodies that spirit of cosiness, well-being and a more relaxed pace of life. The run at Warwick Arts Centre lasts until 31 December 2017, with up to three shows a day, although the production is also touring this month in Taunton and at the Barbican in London. Audiences can also catch this delightful production in Salisbury, Canterbury, Brighton, Manchester and at the egg in Bath (who are co-producers) in the new year. I’d definitely recommend, especially if your little ones aren’t quite on the move yet or are old enough to comprehend that the stage is off limits. Right, now I’m off to make myself a frothy hot chocolate, with plenty of marshmallows and drink it under a snuggly blanket with plenty of Pickle cuddles – this show will have you craving all things wintry and comforting. 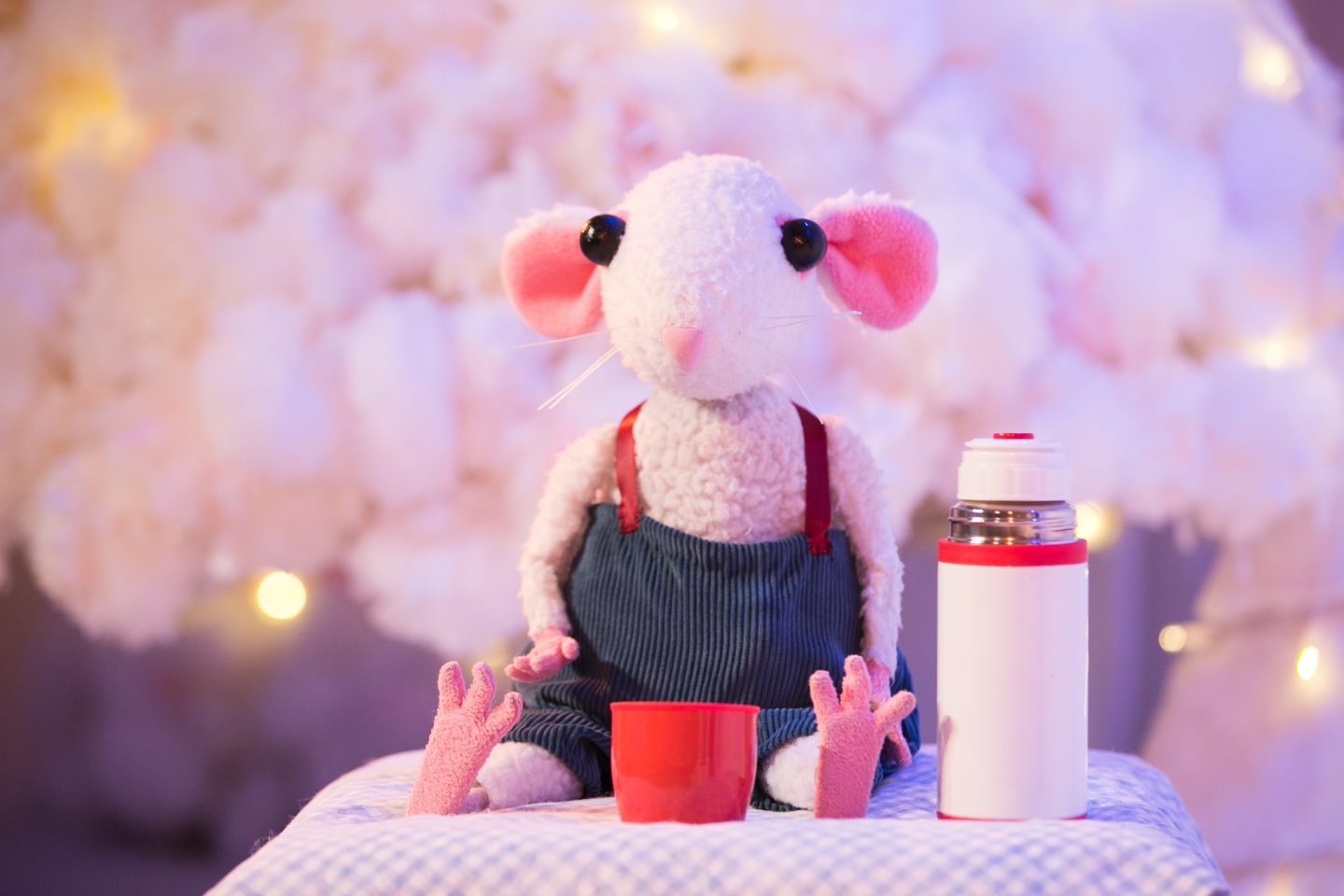 Want to pin this post and read it later? Use this image to easily add this to a Pinterest board: 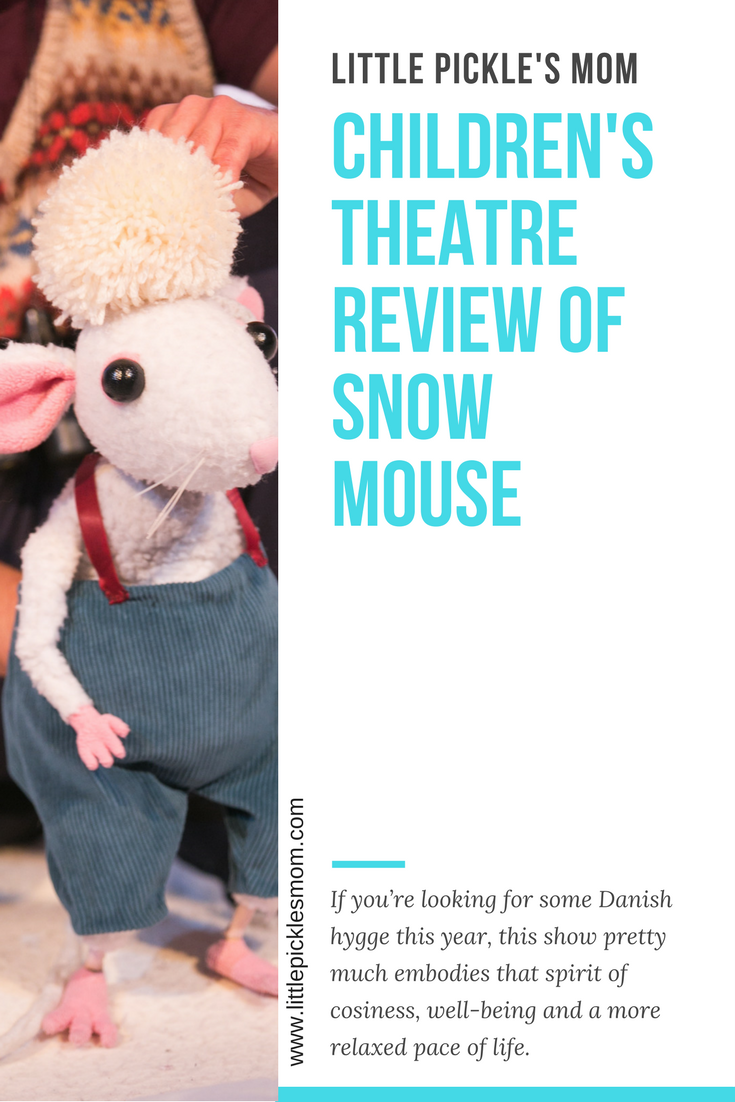 Disclaimer: we were offered press tickets for this performance in exchange for an honest review. All opinions and views remain my own. 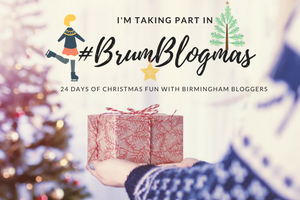