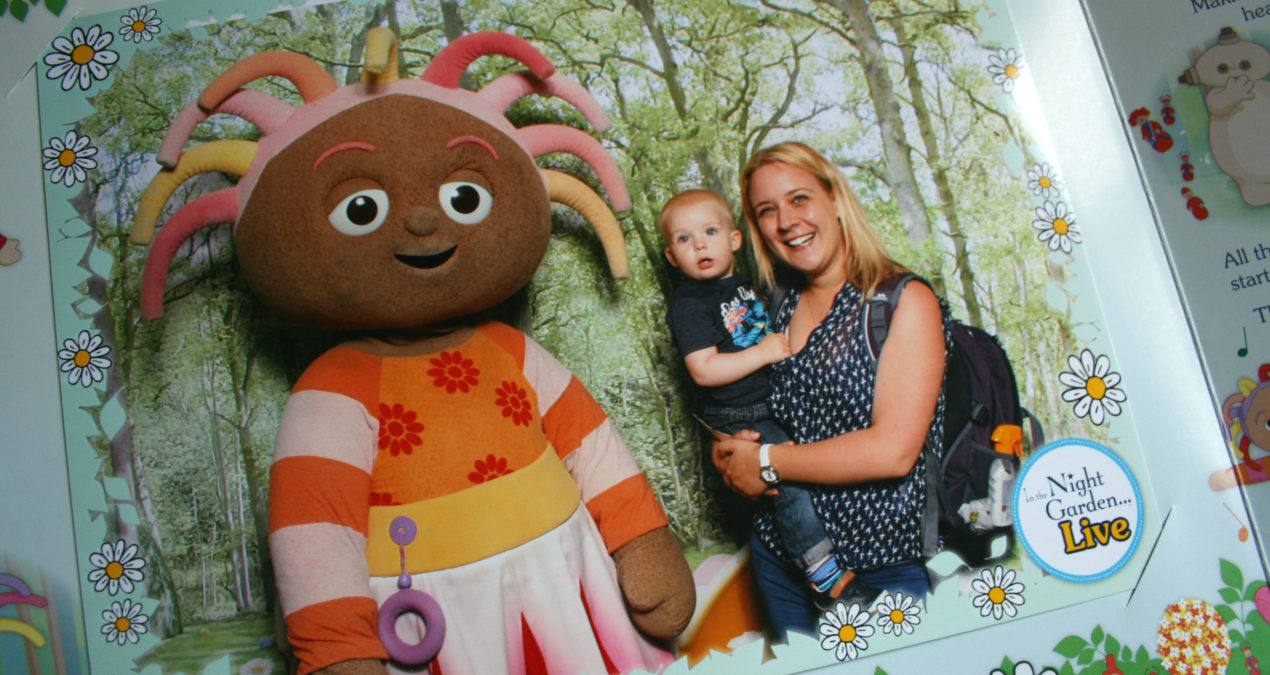 We’re definitely a CBeebies household. In fact, there aren’t any other children’s TV channels that we watch and whilst we’re usually morning TV viewers than pre-bedtime (In the Night Garden plays during the CBeebies’ Bedtime Hour), I have found myself humming Iggle Piggle’s theme song on more than one occasion. When we were offered the chance to review the In the Night Garden Live theatre show, currently on in Cannon Hill Park, Birmingham in their specially erected Showdome tent, I jumped at the chance, and started to make much more of an effort to ensure Pickle watched the show on TV so he’d get the most of out seeing it live. 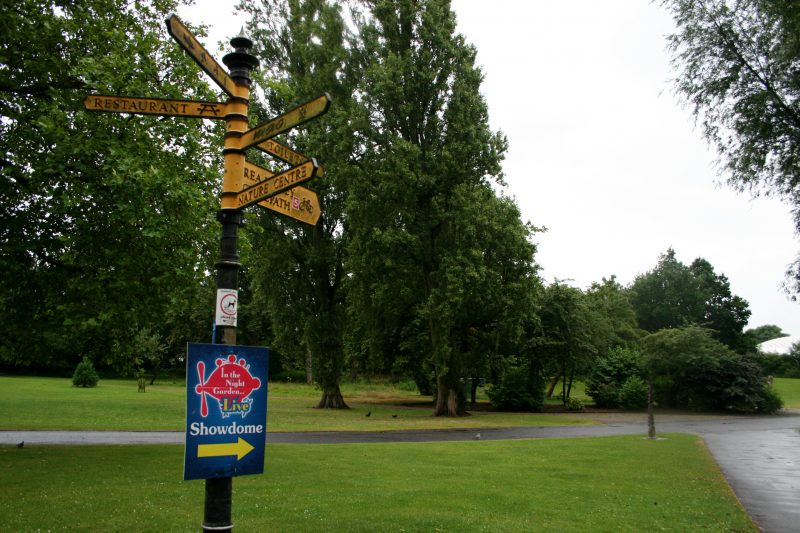 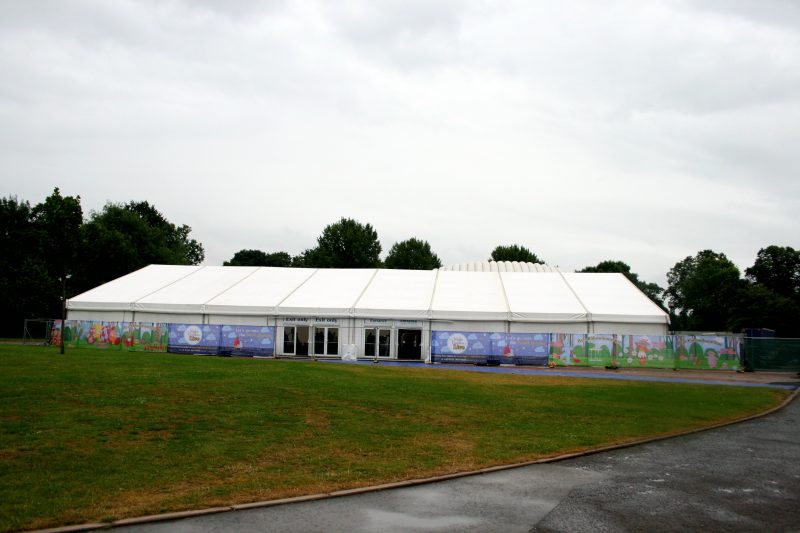 The In the Night Garden Live’s Showdome looks like a big fluffy cloud from the outside (you can see the arena just poking up round the back of the foyer building in the image above!). It’s big and white, and looks so sturdy that you can’t quite imagine that it’s only a temporary building. It operates a kind of one-way system, which means although there must be lots of families going in and out of the arena with four shows a day, we didn’t have to queue at all – a real bonus when you’ve got adventurous toddlers to wrestle with! We didn’t take our pushchair or SmarTrike with us, but there’s a huge area reserved especially for buggies which is watched at all times – although, I’d definitely recommend tying a piece of unique ribbon or something around your handlebar to help you identify yours when it comes to collecting. 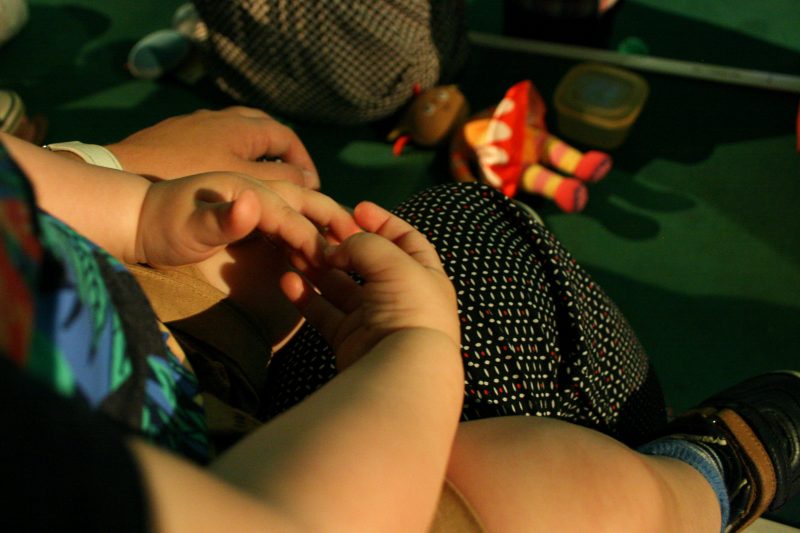 The auditorium comprises of wide tiered benches, with the first five rows reserved for those paying extra for Premium seats. Everything is, of course, green as this is the Garden in the Night after all, and we timed our arrival just right so that we weren’t waiting long before the show began. 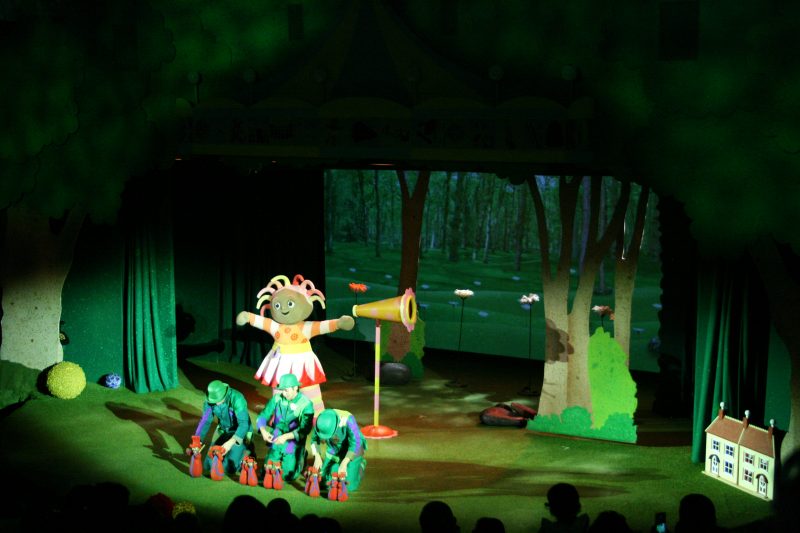 In the Night Garden Live cleverly transitions from TV to stage really well. The stage design incorporates some cinematic touches – the shell of the Showdome above and surrounding the main staging area is used for projections – allowing the Pinky Ponk to fly high above the action, a recreation of the starry night sky and to house my favourite In the Night Garden birds. Four actors help bring smaller characters to life through puppetry (the Pontipines dancing was one of my favourite moments, and I was fascinated by the movements of the Tombliboos – were they using magnets in their shoes to make the feet move?!) and the addition of bubble machines and very well timed sound effects just help to enhance the experience. And, of course, every time the full sized characters made their first appearance, they were met with a cheer and murmurs of excitement (mainly from the adults!). 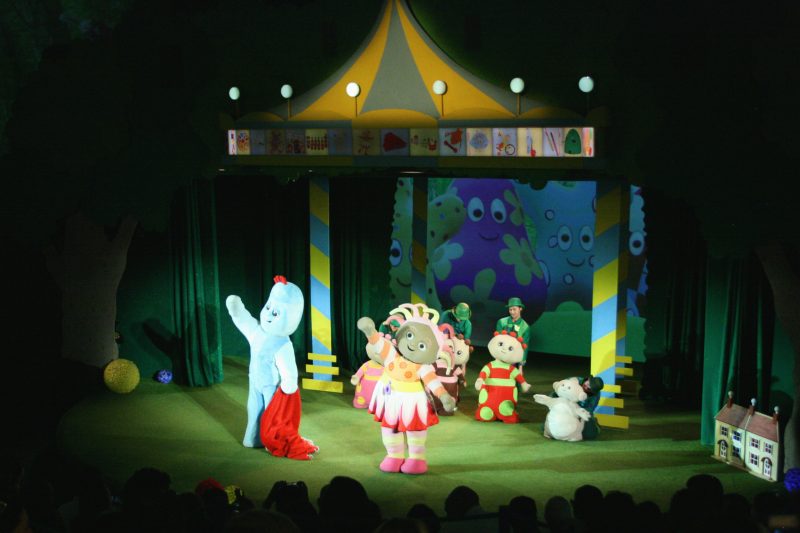 There are two shows to choose from, and we watched the Pinky Ponk show (which, confusingly, hardly features the Pinky Ponk at all) and the story followed Makka Pakka using his soap and sponge to wash the faces of everyone else in the garden. For an hour long show, I was really impressed with how the performance kept Pickle’s attention. Unlike some of the other performances we’ve seen, there wasn’t a great deal of interaction or participation required and just at the point I felt he was starting to get a bit restless, that’s when the bubble machines came out! And he was immediately drawn back in again. Well done, In the Night Garden Live – perfect timing! 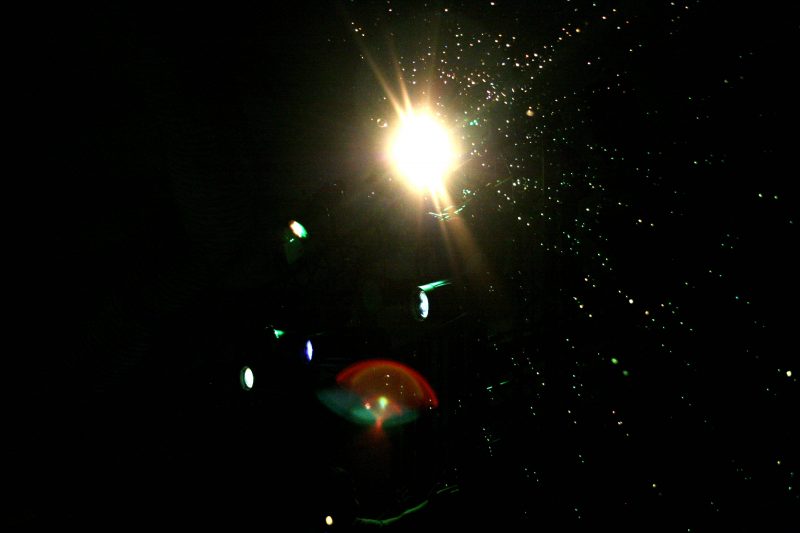 I’m going to start rating children’s theatre shows on how much I get teary during the performance… it turns out, there’s something about seeing Pickle engrossed in a theatre show that makes me get quite emotional. It may sound a bit pretentious and weird, but it really is magical to see him so enthralled and captivated by a performance, especially as theatre has been such a big part of my life. For anyone that worries about their child not ever sitting still long enough to enjoy a show – don’t worry! I think you’ll be surprised at how well they’ll sit captivated. Don’t write it off until you’ve tried it.

If you’ve got your own tickets to see the show (and if you haven’t, they are still on sale), here are a few things I’d recommend to make sure your day out is as memorable as it can be for all the right reasons! 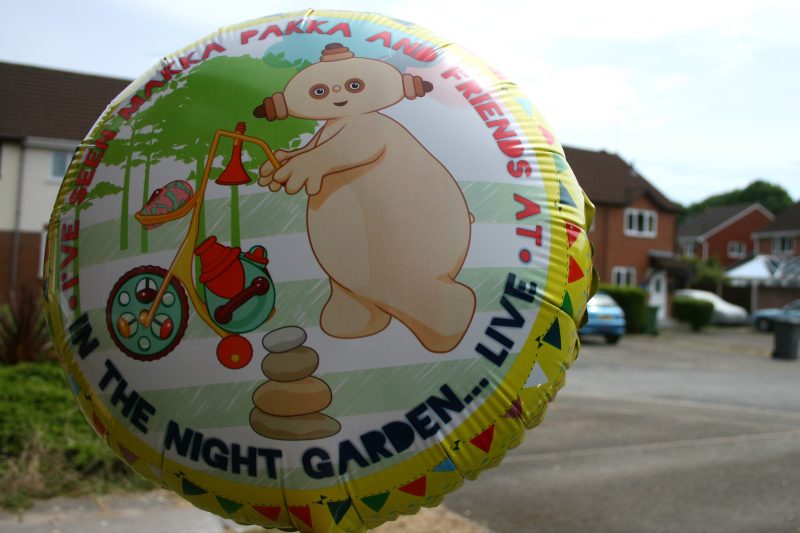 In addition to seeing the show, we were treated to meeting Iggle Piggle and Upsy Daisy themselves. The Meet the Character sessions take place directly after the performance and operate with the help of a text message system. You receive a text to tell you your approximate waiting time, and then another text once it’s your turn – but don’t worry, there’s also announcements that call your name when it’s time to go in as well. Some little colouring tables and a tv screen are on hand to help keep little ones amused! 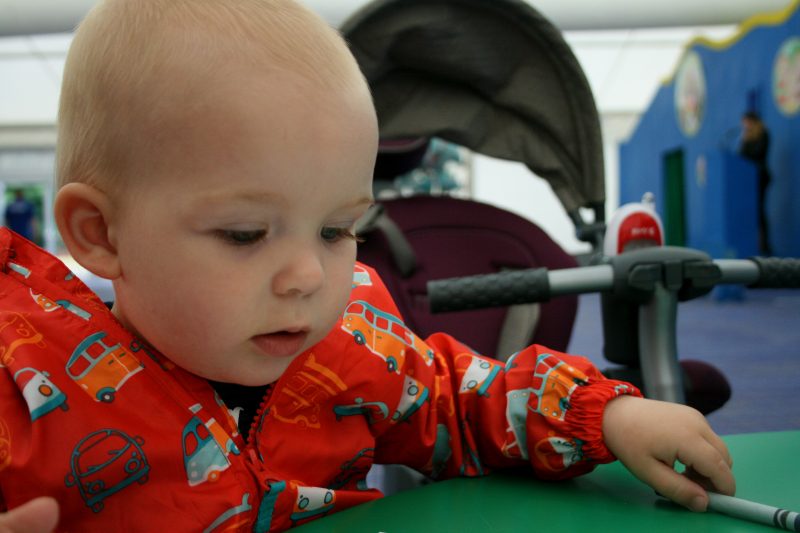 Pickle was a little bit overwhelmed to see his In the Night Garden buddies in person. Well, they were certainly larger than life so I can see why he was a bit hesitant. I’d never describe him as a clingy child at all, but he was definitely holding on to me much tighter than he’s ever done before! The characters are very friendly though – Iggle Piggle tried to encourage Pickle to give him a high five, which was sweet. A few snaps of a camera later and we were ushered back out into the main foyer again to pick up our photos. 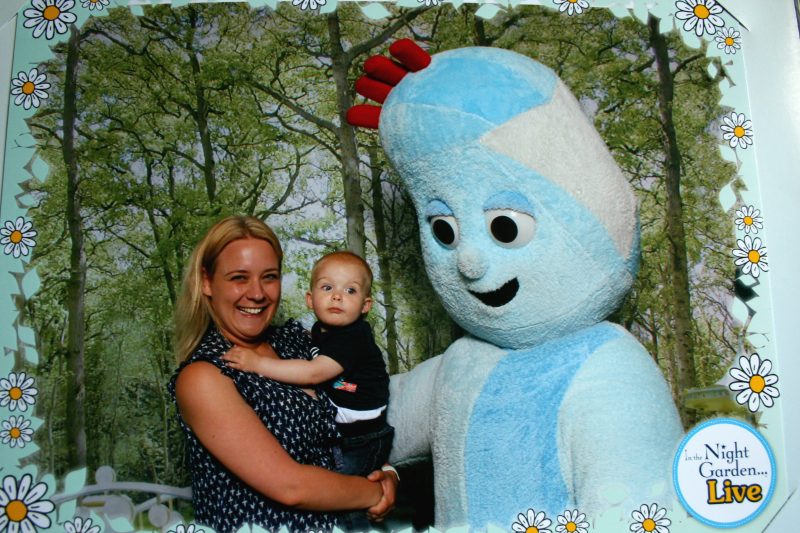 It was a nice add-on experience, and I love that we’ve got some really nice photos as a souvenir but it was over quite quickly which didn’t give Pickle a lot of time to get used to the idea. I’d love to see a Meet the Character experience in the future that was more of a little tea party – where families could stay afterwards, have a little sandwich maybe and play some games or sing some songs in a more intimate setting than the auditorium with the chance to give the characters a hug goodbye once everyone was a little bit more comfortable with each other! Even though it wouldn’t be a one-to-one experience, I think that’d be a lot of fun. 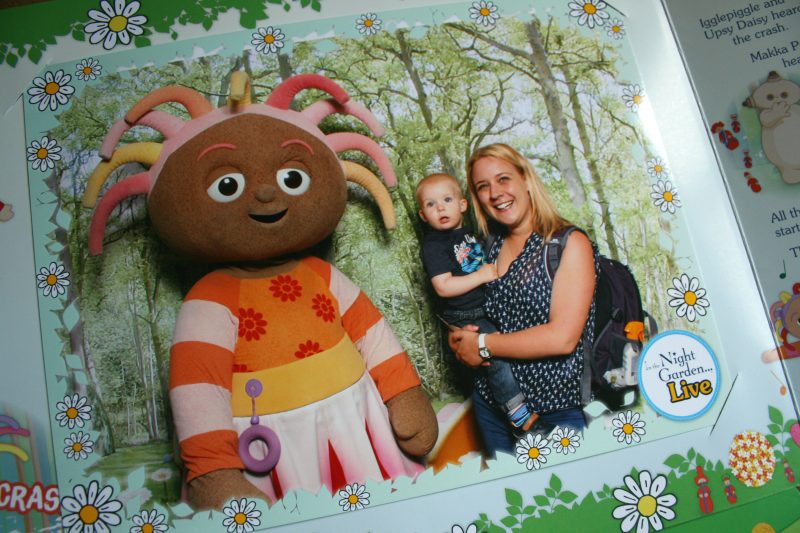 I would take Pickle again next year, especially as he’ll be able to appreciate it all that little bit more with added understanding but it really is suitable for 12 months upwards. The show runs in Birmingham until 30th July, and then heads to Manchester for the majority of August. I’d love to hear from you if you’ve been – let me know what you and your little one made of the day!

Disclaimer: we were offered press tickets to both the performance and Meet the Character experiences in exchange for this review.