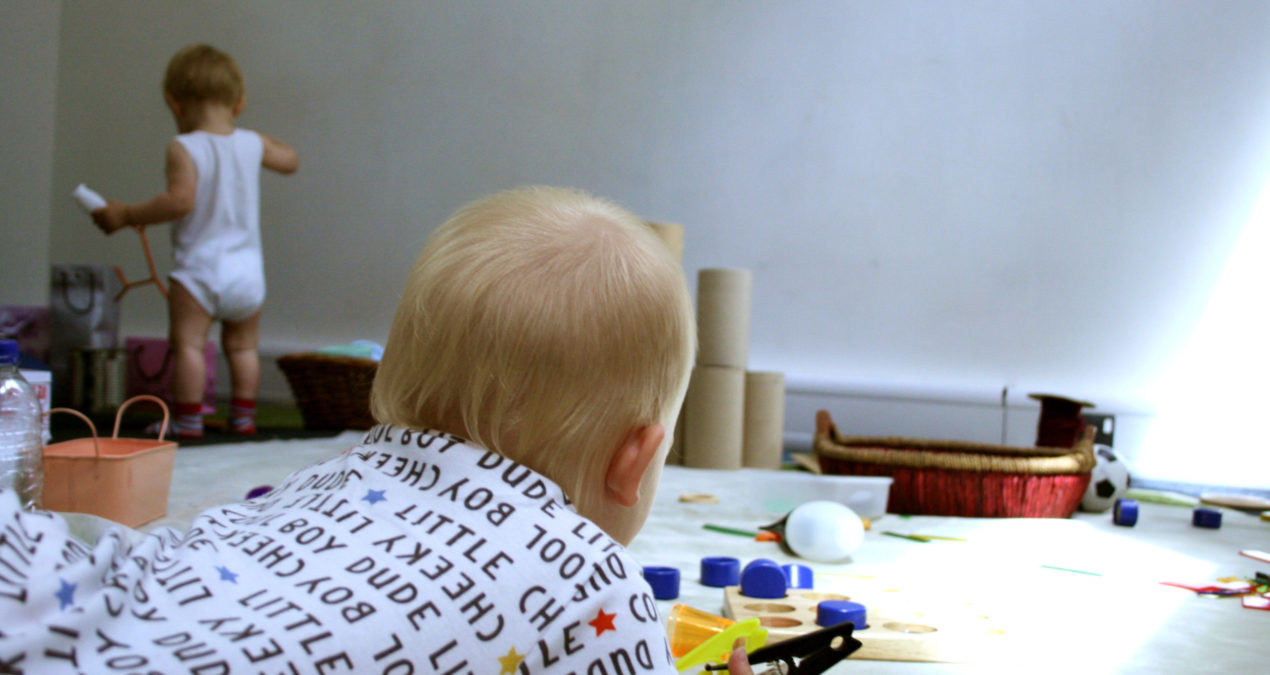 If I like something, I stick to it. So with my frequent trips to Cannon Hill Park and mac birmingham recently, it’s fairly obvious I’m pretty obsessed with them both. After enjoying In the Night Garden Live and a rainy play on the park, this time we were back to try out the Treasure Basket and Heuristic Play session at mac birmingham. 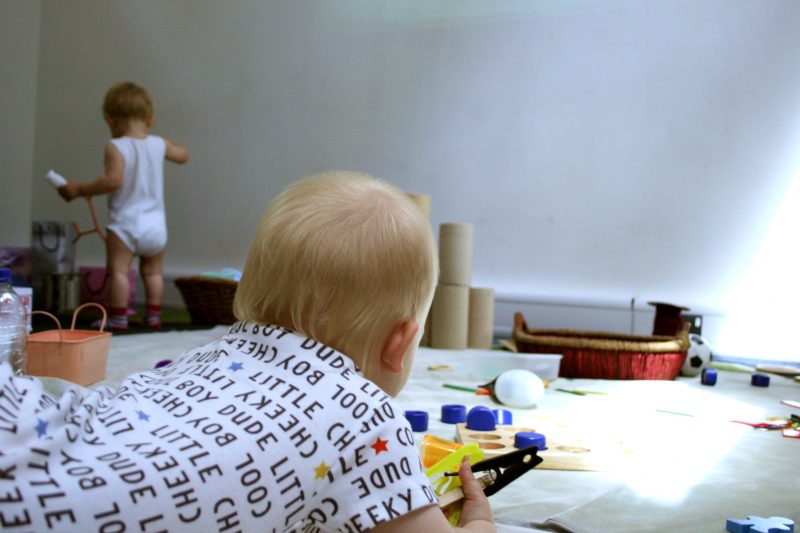 What is Heuristic Play?

There’s quite a lot of research and science behind heuristic play, but as I understand it from our introductory session, the idea is very simple: to let children explore and play at their own pace, in their own time, in their own way. By doing this, they develop the confidence to discover the world in their own way, and it is really magical to watch! Our session was run by Anju Framahl and Tarnum Mughal who were brilliant at sharing their knowledge and answering my questions about some of the theory behind it all.

The room had been set up in two sections with baskets filled with items one end, and the items in more plain sight the other end. All we had to do was sit back and observe, as we all let our little ones go to town. 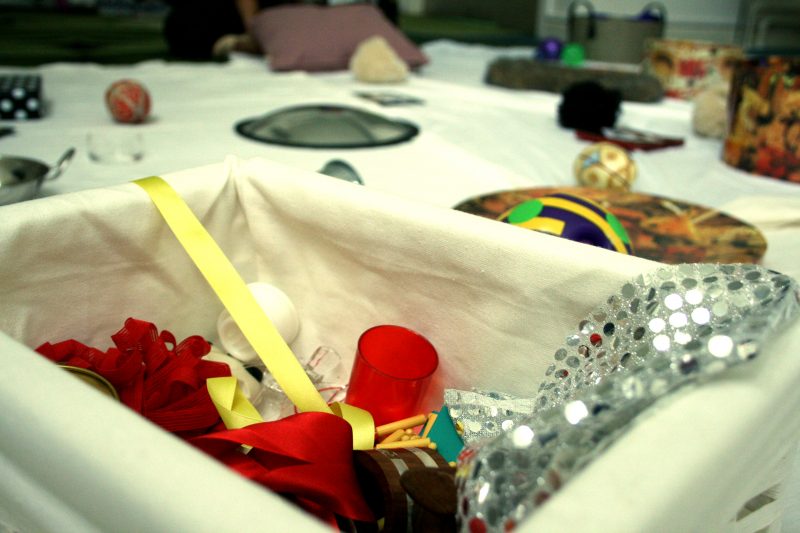 The toys in the room to play with were mainly just ordinary objects: pegs, plastic containers, paper bags, ribbons, scarves, balls, bangles… along with some specialist items like baby friendly mirrors and black and white contrast toys. They were all spread out on a big white sheet, and there wasn’t a lot else in the room so it was free from distractions – and that’s the key to its success, I think. I was trying to work out if I could do this in my own home, but our lounge is too full of other things. Pickle would just want to play with the stair gate, bash the glass panes in the door and climb up onto the sofa to help himself to food from our fruit bowl. At mac birmingham, the toys and everyday objects were the clear focus.

Our instructions as adults were simple: we were to be observers. Our role was to let our children play on their own and just sit back and watch, only jumping in if we felt they were in danger of hurting themselves. At first, it felt very unnatural to just let Pickle do his own thing. It was really difficult to resist the urge to dive in and play, or to show him items I thought were cool (I think I may have literally sat on my hands to stop myself at one point!), but after a while, I settled into it and really began to see the benefits. It was fascinating to see what he chose to play with, what captured his attention and what things he’d continue to return to. There were a great set of musical table bells* that he absolutely loved and, of course, pegs! He was so confident in exploring without me – and I only really had to dive in a few times to stop him from biting the other children when he got a bit too excited. 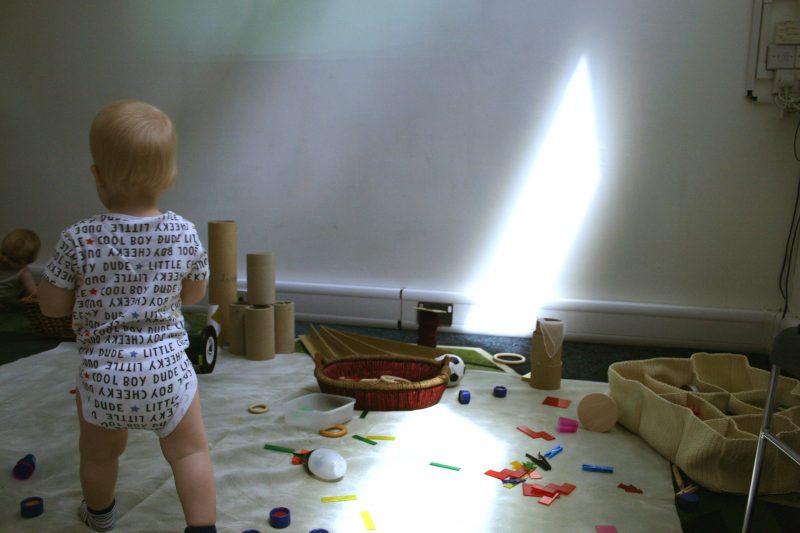 The room was really calm. There wasn’t any music on in the background. No TV blaring away. The adults didn’t have their own private conversations – it was just a really quiet space. And whilst that probably sounds a bit boring, it really wasn’t. It was so relaxing, and made for a really refreshing change from the usual manic playdates I’ve had at home or at Soft Play.

Even though I’d spent most of the time sat apart from Pickle, I left feeling more connected to him. I was proud of him. Proud to see the little adventurous boy he is becoming, and I felt like I knew him a bit better because I’d let him show me what his interests were, rather than the other way around. And he was so clever. He knew so much more instinctively than I’d have given him credit for. Near the end of the session, he really enjoyed playing with a set of bracelets. He loved putting them on his arm and he was so careful to play in such a way that the bracelets wouldn’t fall off. 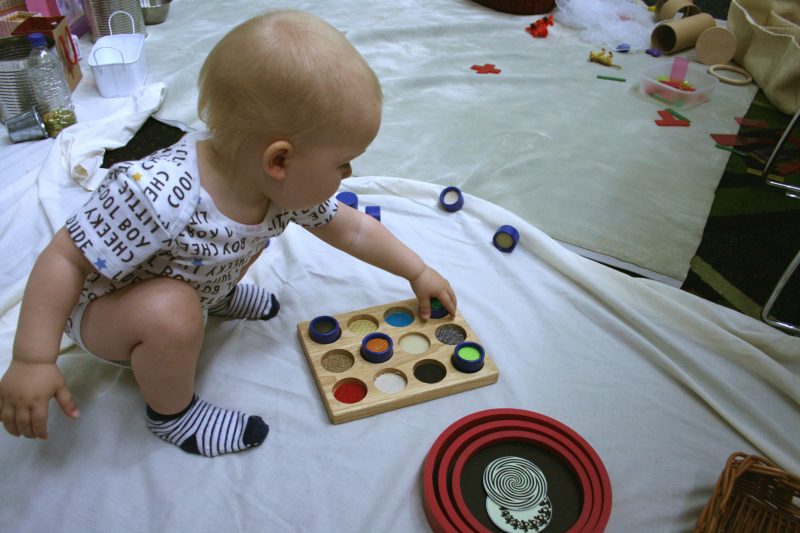 Would I do it again?

Absolutely. Like I said before, it’s the kind of thing that you’d think you may as well just do at home but I honestly don’t think it’d have quite the same results (unless you have the luxury of a spare room in your house that is fairly empty… a conservatory void of furniture would probably work!). If you’d like to give it a go, there are five more sessions running throughout August at mac birmingham. It costs £12 for a ticket that covers both an adult and child (and you can pay £6 extra if you want to bring an additional child or additional adult). It’s suitable for babies as young as 4 months and up to 24 months old, and although the website suggests preparing for messy play – we didn’t have any messy play in our session (but it never hurts to have a spare change of clothes in your bag!). Find out more about booking here, but I suggest getting in their quick to secure your place as some of the sessions are already on limited availability.

Disclaimer: we were invited to this session in exchange for our review. All opinions are my own, and as always, 100% honest. This post also contains Amazon Affiliate links. This doesn’t affect the price you pay, but I will receive a small financial incentive if you decide to purchase.

Our Family Camps with our Personalised Blanket

Days Out, Family Life, Get Outside, Hiking