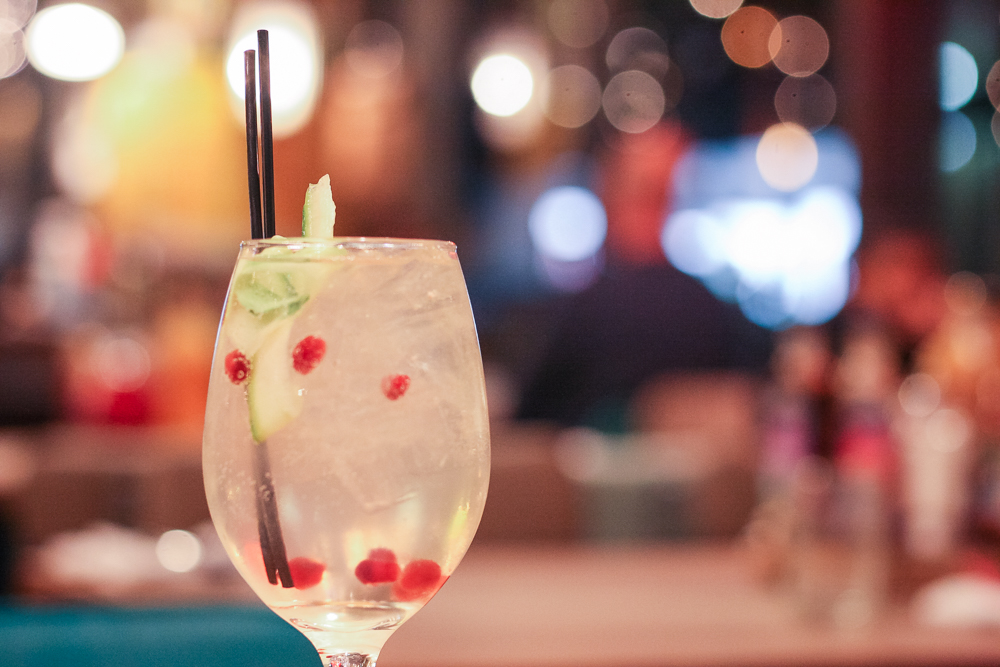 A Girls Night at Turtle Bay

Just as certain songs can transport you back to a special time, meaning every time you hear it you are overcome with memories and emotion, so can venues. When Turtle Bay got in touch last month to see if I was interested in reviewing their Leamington restaurant, I instantly knew this wouldn’t be a visit I’d share with Little Pickle’s Dad (LPD). Turtle Bay is where I’ve celebrated some major milestones with my girls. It’s where I’ve marveled at my best friend as she recanted the labour that made her a mother. It’s where rum-based cocktails have induced giggles, feminist sass and post-midnight takeaway orders. It’s where I tried to make up for missing a hen party, partaking in a round of tequila shots at the bride-to-be’s insistence.

First proper night out for me tonight! Excited for cocktails and a night with my best girls, but nervous about how this may affect my ability to cope with Pickle’s night-time wake ups! 🙈

This meal was going to involve far less alcohol consumption for me as I was driving home (perhaps a sobering reminder of our increased ages, and the responsibilities we each have at home that prohibit reckless cocktail drinking on a school night). Having only ever visited on a Saturday before, all three of us were surprised at the calmer and quieter atmosphere on this Sunday evening, perfect for us wanting to have a much needed catch up, and it meant we could really take in the beautiful decor and twinkling lights.

I’m all about the Gin Cocktails

Although Turtle Bay is famed for their Caribbean rum cocktails, our waitress Ashleigh recommended the Tingaling cocktail to start with: gin, prosecco, elderflower and grapefruit crush. All three of us gave it a go, and it did not disappoint. Wonderfully refreshing, beautifully presented and I’d have happily sipped on them all evening long. And next time, I will! 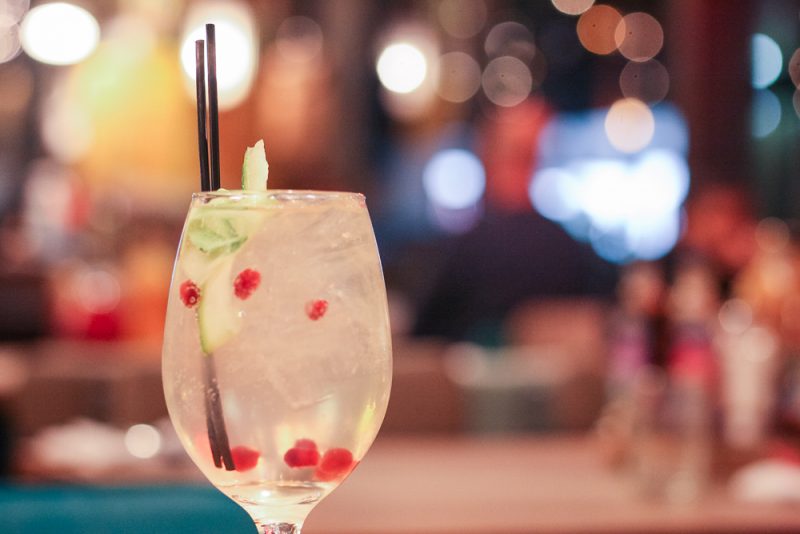 I’m a big fan of sharing starters – having a mixture of options in the middle of the table and being able to sample lots of different things is always an exciting way to kick off a meal, so I was so glad when the other girls were up for choosing a selection from the menu to begin with. The Turtle Bay menu has so much to offer in the way of starters that we were really spoiled for choice, so it was quite difficult to narrow it down. 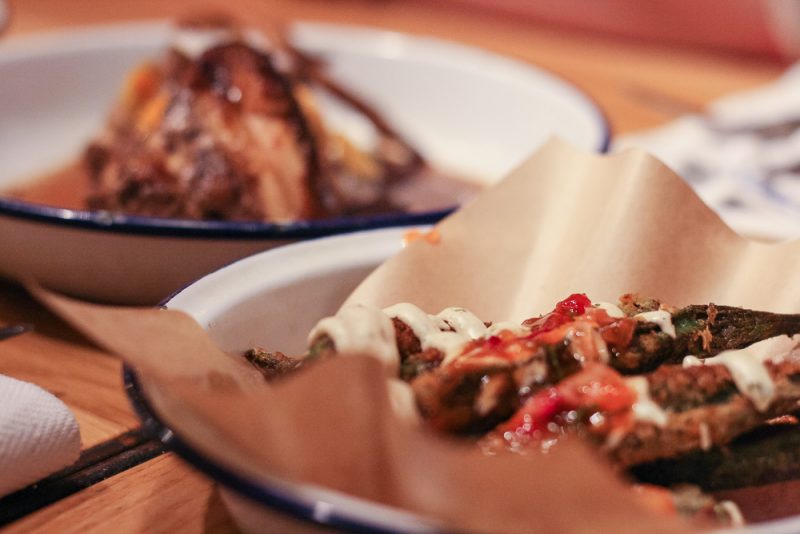 It’s not a particularly illustrative photograph, but we decided to try the Crispy Okra (as two of us had never tried okra before, and we were reassured that it was indescribably delicious), Doubles (two ‘puffed up’ bara roti flatbreads, curried chickpeas, cucumber chutney with hot sauce) and some Jerk Chicken Wings. A good selection that we felt gave us a nice mix of flavours and textures. 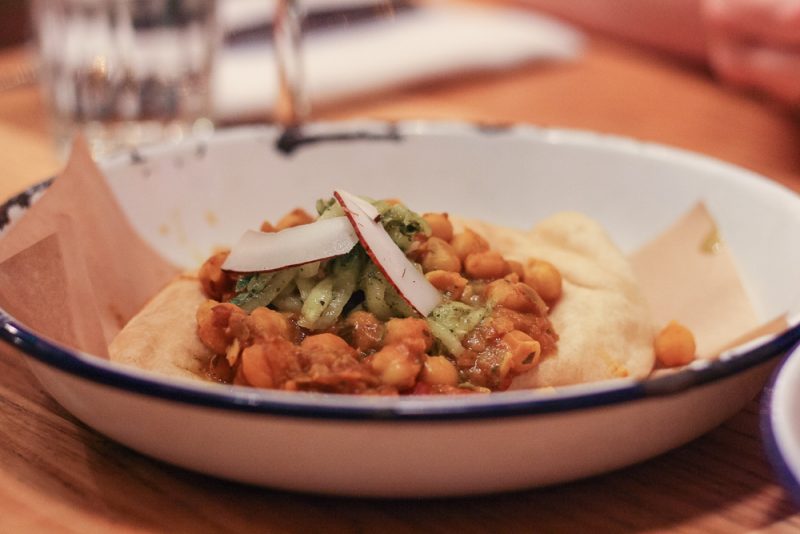 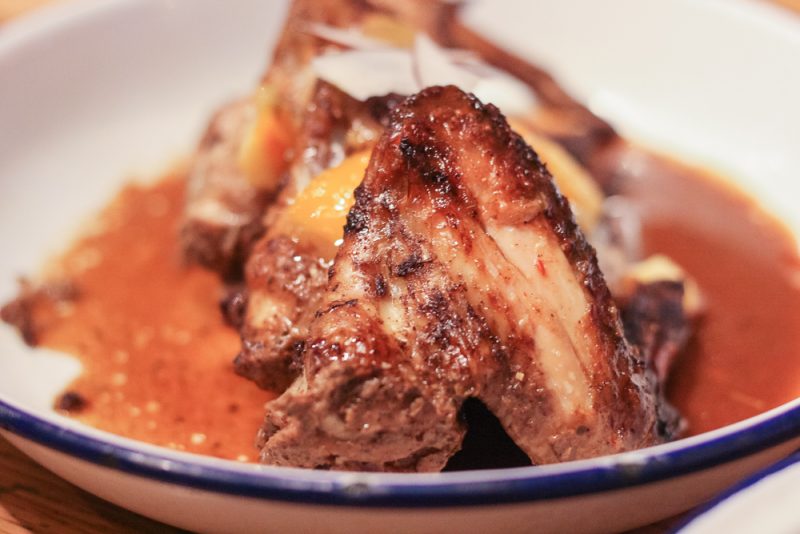 I don’t know if my tastes are changing over time, but I’ve been noticing that over the last year, I’ve definitely been favouring rice dishes above all else when dining out (a marked change from my early twenties when I only ever chose dishes that were served with chips!). Thankfully, Turtle Bay’s Caribbean food offers a range of delicious sounding curries to try, with the latest additions to the menu taking our fancy this particular evening. 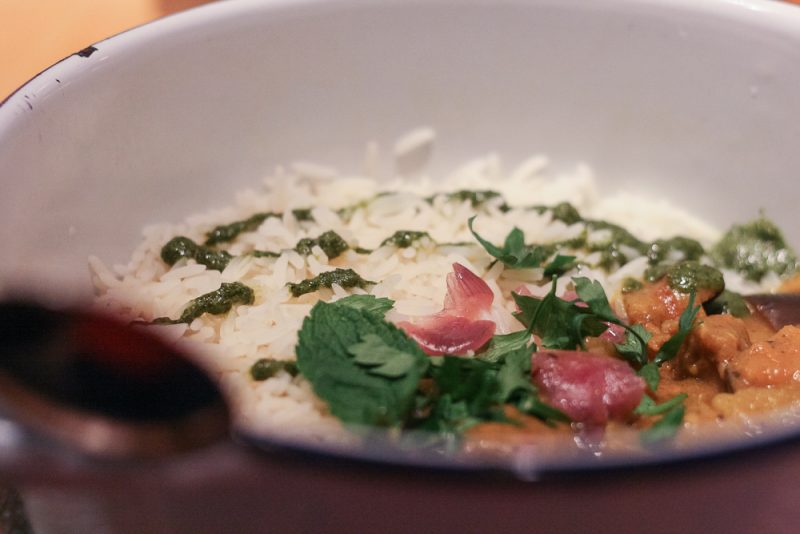 Two of us opted for the Aubergine Curry, which was sweet, fragrant and very moreish. The portion size was perfect – it looks a little lost in the huge bowl it was presented in, but it filled me up just enough to still allow room for pudding, which is exactly what I like in a restaurant main! 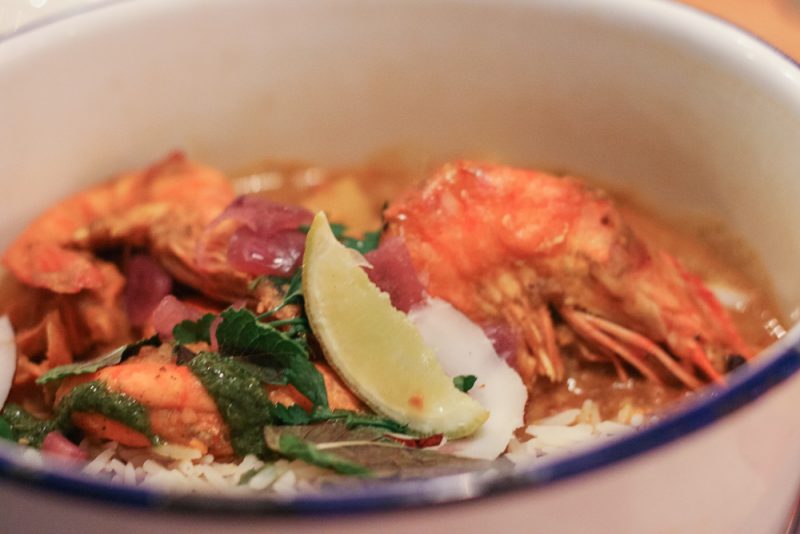 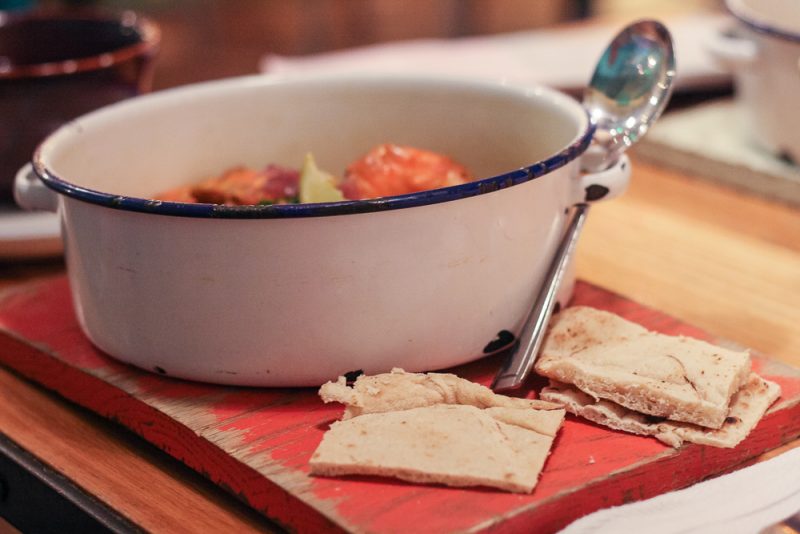 The third meal in our party was the King Prawn Curry. It was fairly similar to our Aubergine curry, but with a real seafood kick to it. I’m pretty uncultured when it comes to food, so I’d have been totally clueless what to do with the shell-on prawns, but thankfully, my friends have more worldly food wisdom than I!

One of the wonderful life lessons I learned during pregnancy, was that there’s no need to miss out on the fun of cocktails if you’re avoiding alcohol. Mocktails are just as tasty (if not sometimes a little too sweet for me) and are just as beautifully presented. I wonder if you can guess out of our drinks which contain alcohol and which don’t? 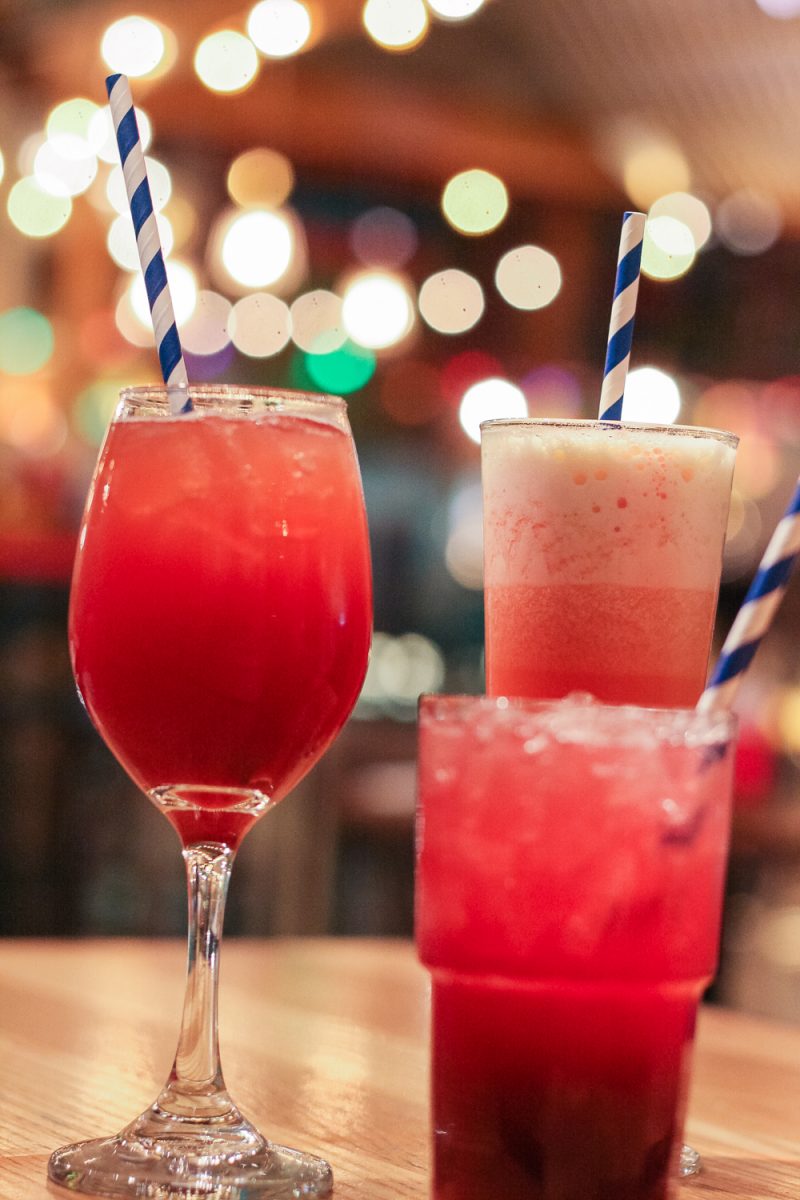 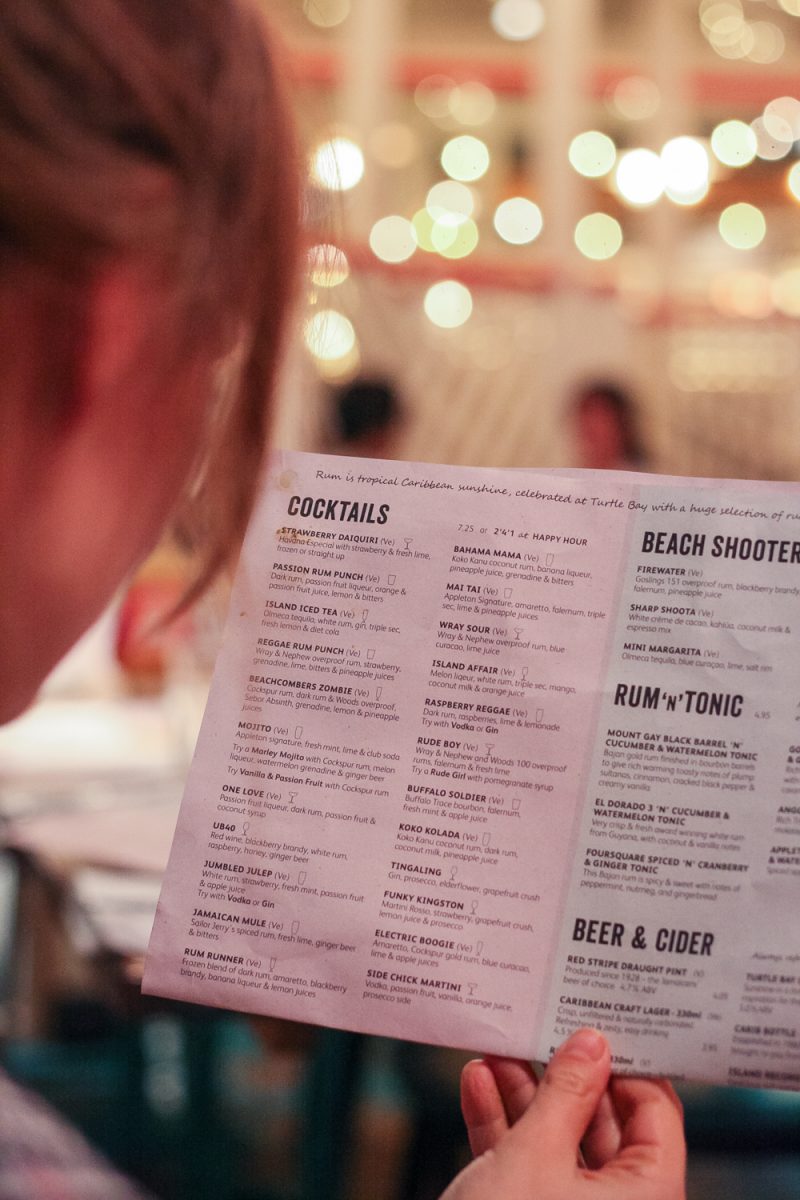 I promise we didn’t purposefully order our drinks so that they’d be so well colour co-ordinated. That’s just a happy coincidence. I went for the Virgin Raspberry Reggae (raspberry, pomegranate, lime and lemonade) which I loved, and if I can bear to separate from the Tingaling cocktail when I’m next out drinking, I’d love to try the gin version next time.

Usually, I’m a little wary of Caribbean inspired puddings. I’m not a huge pineapple or coconut fan and there’s only so much mango I can handle… so I nervously looked at the pudding menu expecting few options that took my fancy. OH, HOW WRONG I WAS. Right in the middle of the menu, I spotted the Sticky Toffee Pudding and knew that was the one for me. Served with ice cream, it’s my dream pud and the perfect way to round off the meal. 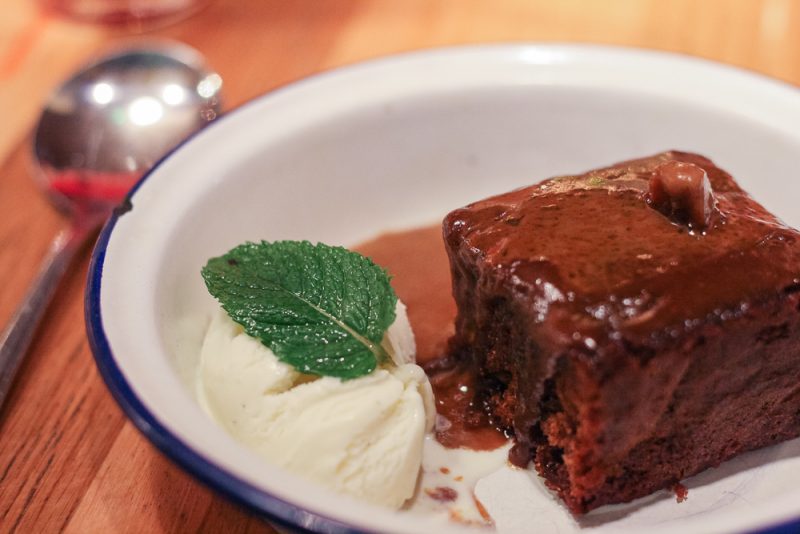 I could happily have picked many other options off the menu though: Passion Pie, Spiced Rum and Chocolate Pot or the Banana and Toffee Cheesecake. The girls ordered a Salted Caramel Brownie (yum!) and the Sugar Dumplings – which was such a huge portion that we all helped share. A little bonus. 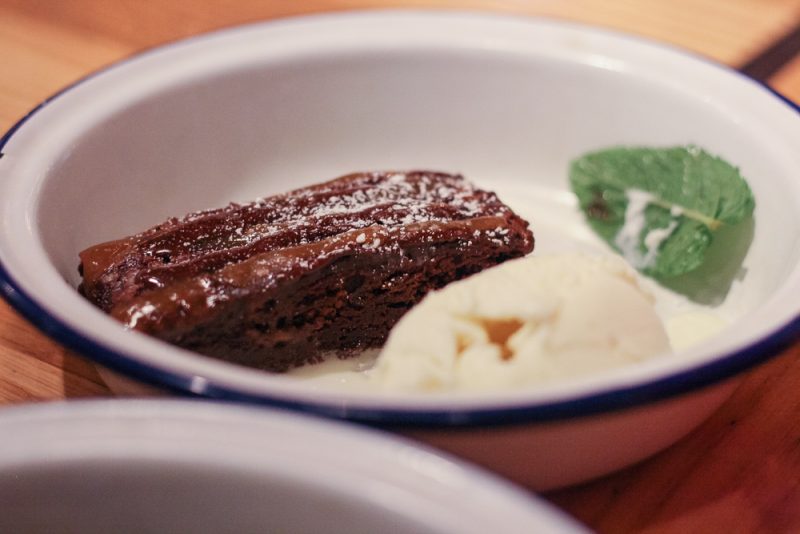 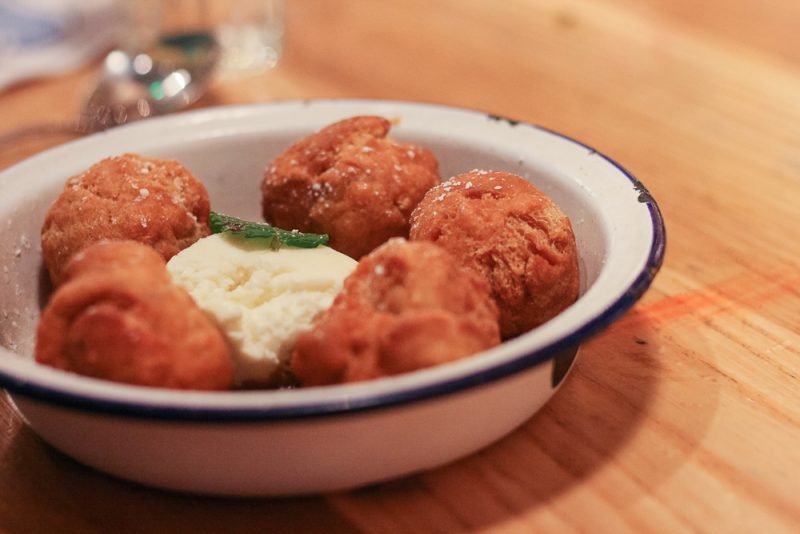 Finished off with Tea

We were wonderfully looked after during our meal. The staff hit the balance perfectly of being attentive, but not over-bearing. After a few hit-and-miss meals out recently, it was so lovely to enjoy such a smooth running meal that it really is difficult to pick any faults with the service at Turtle Bay.

To finish off our meal, we couldn’t resist sharing a pot of tea. I ask you: is there anything better than having a natter over a brew with your besties? Had it not been a school night, I’d have happily chatted away until the early hours. Over the course of the meal, we spoke about all sorts: new jobs, education and a rather polarised debate on social media. 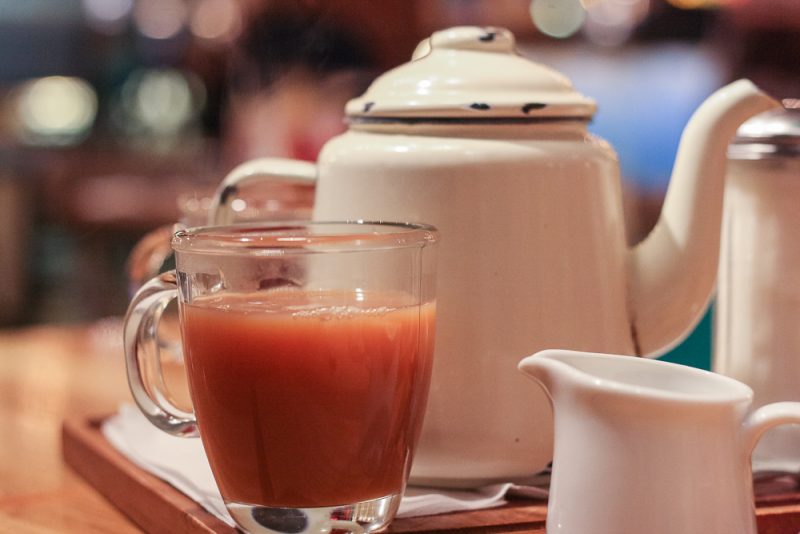 Talking about social media is always a fairly emotive topic for me, because it always feels personal when someone else brings it up as a topic for discussion, but I’m incredibly lucky to have friends who I can debate the various merits and perils of it with. The three of us met at University, and its times like this when I’m reminded most of lively seminars, passionate arguments and differing essay theses. There’s a reason us Uni girls have a Whatsapp group named ‘Sass Club 7’ and it only has a little bit to do with dancing around like loons to late 90s pop hits.

Until next time, Turtle Bay

There are several milestones this particular visit to Turtle Bay signifies in our ongoing relationship with this favourite haunt in Leamington Spa. We’ll long remember this visit as intertwined with house moves, lost keys and new career directions. I’ll remember wonderfully chilled afternoons spent chasing around parks and toasting to upcoming wedding plans. It was the day our children really properly played with each other for the first time. 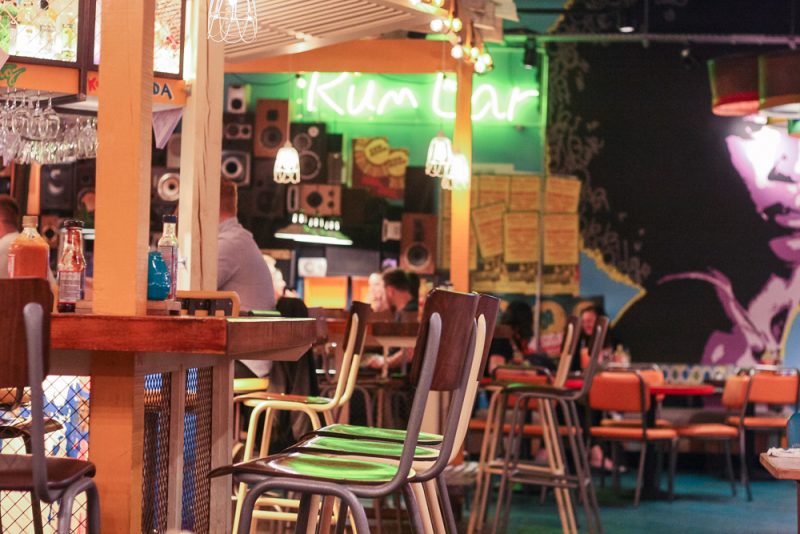 I love the atmosphere at Turtle Bay. Stepping inside feels like going on an evening-long holiday without venturing far from home. It’s a little escape from the everyday trials of parenting, the chaos of adulthood and our ever growing responsibilities. I know we’ll be back. And I can’t help but wonder what milestones we’ll be achieving and celebrating then.

So, thank you Turtle Bay. For playing your part in the fabric of our friendships, and for giving us yet more memories to treasure for the years ahead. We’ll be back to see you soon.

Disclaimer: we were offered a complimentary meal, including drinks, at Turtle Bay in Leamington Spa in exchange for a review and social media coverage. All content, opinions and views remain my own, and as always, are 100% honest.

Days Out, Get Outside, Hiking, Lifestyle

Outdoors by Kilnsey Crag with Blacks and The North Face