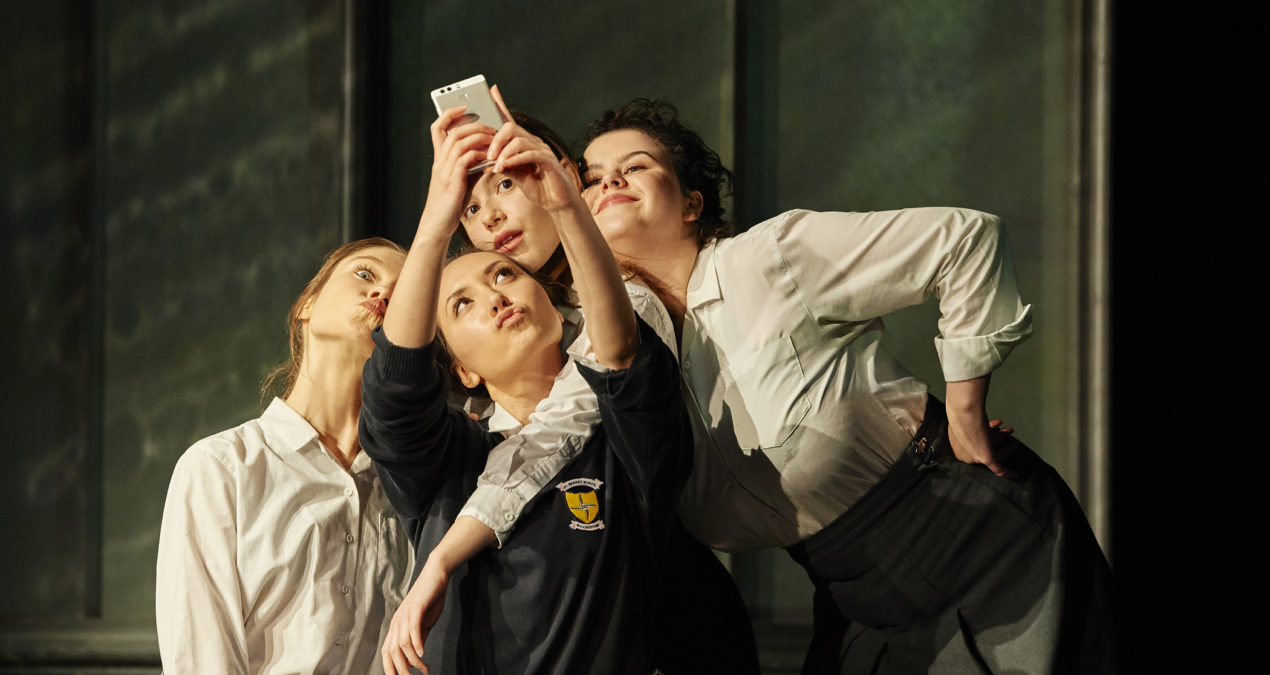 I am a swirling mass of emotions: angered, frightened, worried, so desperately saddened and yet determined. It’s not unknown for me to shed a tear during a performance, but for the first time in my theatre-going life, the tears didn’t fall until after I’d left the auditorium. These weren’t tears that were brought about by beautiful staging and emotive performances (although, this production certainly had those too), these were tears of hollow sadness.

Tonight, I saw a piece of theatre that I know will sit with me for a lifetime. Asking For It at The Birmingham REP is the theatrical adaptation of the best selling novel of the same name by Irish author Louise O’Neill* (which I confess I had never heard of before). It’s a story of sexual consent, or rather, the lack of it. It’s a story of victim blaming and shaming. It’s a story of gender roles so entrenched that ‘boys will be boys’ is not just an excuse but a viable line of defence. Except, it’s not a story. It’s real. And it’s a reality for more girls, women, and men than we care to recognise.

Asking For It has been cleverly created. Its storytelling comes in many forms: in the captivating and tragic performance of Lauren Coe as Emma, in a set design that physically clouds and confuses what is real and isn’t during that party on the fateful night (gauzed windows, ghostly projections and vivid snapshots reflected hazy drunken, drug-fuzzed memories), and in the sexually charged movements seen so often in popular music videos but made uncomfortable danced by those we’d seen in knee-length school skirts just moments before. I mean, Christ, not even the privacy of a teenage girl’s bedroom is protected, projected rain falling on metaphoric floor to ceiling windows: a whole house turned into a goldfish bowl. The rain is relentless. As are the media articles, social media comments, and anonymous phone calls.

All these elements help to paint the bigger picture. This isn’t just an issue of sexual consent, this speaks of a larger rape culture issue. It highlights societal issues of gender, of beauty standards, of early sexualisation and the pressures facing our teenage generation under the constant microscope and magnifying glass of social media.

The thing is, if Asking For It shows how hard it is to prosecute a case where the perpetrators evidenced their own actions through published photographs, it paints an even scarier picture about the less obvious cases. Who do we believe and why? Why would any victim come forward to subject themselves to further abuse, humiliation, belittling and shame? And it’s not even worth contemplating what would have happened had the attack resulted in pregnancy – the situation is already unbearable without having to comprehend the former eighth amendment as well.

Ultimately, this play also spoke to me as the mother of a son. The conversation shouldn’t be around what we can tell our daughters to do to minimise the risk of rape, but should be firmly around what we can tell our sons to unequivocally eradicate rape. And these aren’t conversations that just need to happen as our children hit puberty. The damage is already done by then. Toxic masculinity is likely to have already claimed our sweet boys, starting from the minute a blue knitted hat was placed on their head on the labour ward.

How we frame gender in our family is something I consciously think about a lot. Ask me why I don’t shy away from buying my son clothes from the girls rails. Ask me why I never tell him to be ‘brave’ when he’s hurt. Ask me why my toothbrush is green and my husband’s is pink. That being said, it’s very easy for me to create a world in the safety of our own home where gender doesn’t define us, a space free from damaging and self-perpetuating stereotypes. At three years old, Pickle is as happy jumping off the sofa with flexed muscles as he is pretending to be ‘Mommy’ whilst wearing an Elsa costume. But by the time he reaches the age of the teenagers in this evening’s production, how much of that environment can I control? I won’t be there to question the locker-room chat. Despite all my best efforts, there’s no internet firewalls I can build that will stop another kid in the playground showing him inappropriate sexual material on a mobile phone. How do I ensure he doesn’t confuse pornography behaviour as being the sexual norm? He’ll begin to be influenced from many more sources, including those that are more powerful, encompassing and persuasive than even a Mother’s best intentions.

I urge you to see this production. It’s not an enjoyable night. It won’t leave you with a spring in your step. But it asks all of us important questions, and leaves us battling with the answers. Sometimes it isn’t just enough to believe. Sometimes we need to fight a little harder for the smallest of voices to be heard, particularly when our judicial system won’t listen. In panicked moments before the final curtain, a silent Emma desperately tries to shout. ‘What did she say?’ I hear an audience member ask behind me. I couldn’t help but think: exactly.

Disclaimer: I attended the press night of Asking For It at the Birmingham REP on Monday 3rd February 2020. This page includes an affiliate link for Louise O’Neill’s book Asking for It. If you choose to purchase using this link, I may receive a small commission. Any affiliate link income I receive off this link will be donated to RSVP (Rape and Sexual Violence Project) in Birmingham and Solihull.